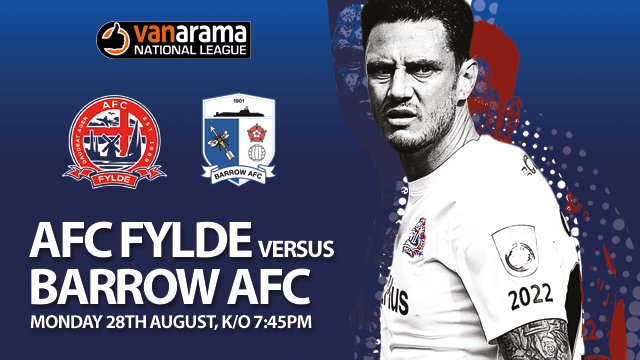 History will be made this evening when AFC Fylde host their first ever live TV broadcast!

Tonight’s game at Mill Farm against rivals Barrow is live on BT Sport at 7:45pm, highlighting the rapid rise of this football club over recent years.

The Coasters picked up their first win of the new National League season at the weekend, beating former Football League side Hartlepool United 2-0 at Victoria Park.

Midfielder Henry Jones opened the scoring just before the break with his third goal of the season to put Fylde on their way before star striker Danny Rowe sealed the points with a record-breaking strike.

The frontman swept home with six minutes remaining to surpass the club goalscoring record of 119 set by former Coaster Richie Allen. The strike was also Rowe’s 100th in the league for Fylde.

The Coasters have lost just once in their opening six games, drawing four and winning one. Dave Challinor’s side currently sit 17th in the National League, just five points off the top of the table. Only three teams have scored more goal than Fylde’s 11 this season (Dagenham and Redbridge, Boreham Wood and Aldershot).

This evening’s visitors have endured a solid start to the campaign and find themselves on level points with Fylde and just one place above in 16th.

Barrow have an identical record to ourselves. After suffering defeat in their opening game, they have draw four and won one of their last five matches – their solitary victory coming against Woking (3-0).

Last time out they secured a creditable 1-1 draw with highflying Maidenhead United.

The Bluebirds will be hoping for a promotion push this season after finishing one place outside play-offs last term.

There are several connections to today’s visitors within the Coasters squad with Danny Rowe, Andy Bond and Simon Grand all enjoying spells at Holker Street in the past. On the opposite side, defender Dan Jones spent time at Mill Farm last season on loan from Grimsby Town.