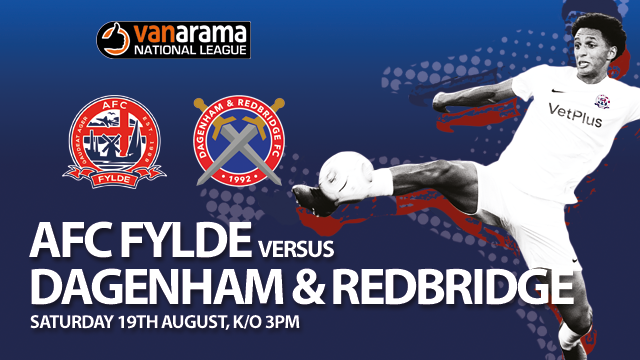 The Coasters are back at Mill Farm for the second time in five days for the visit of Dagenham and Redbridge.

Fylde suffered their first defeat of the new season on Tuesday night against Maidenhead United.

The Coasters had an evening to forget after Josh Langley was dismissed early on – suffering an injury in the process – whilst Magpies striker Dave Tarpey helped himself to four goals in a 4-1 victory.

Team captain Langley will find out the results of the scan on his knee over the next 24 hours.

One positive was that midfielder Lewis Montrose bagged his first goal for the club.

The Coasters have picked up three points from their opening four National League fixtures following draws against Boreham Wood (2-2), Chester (1-1) and Ebbsfleet United (3-3).

Dagenham have made a strong start to the campaign and are still unbeaten after their first four games.

The Daggers kicked off with a 2-1 home victory over Barrow, before seeing off Boreham Wood by the same scoreline on the road. Two draws followed against Eastleigh (2-2) and Ebbsfleet United (3-3) and they currently sit in fifth position in the table.

Managed by John Stills, Dagenham will be hoping to go one better this season after finishing last season in fourth and missing out on promotion in the play-offs.

Get tickets with the click of a button right here.