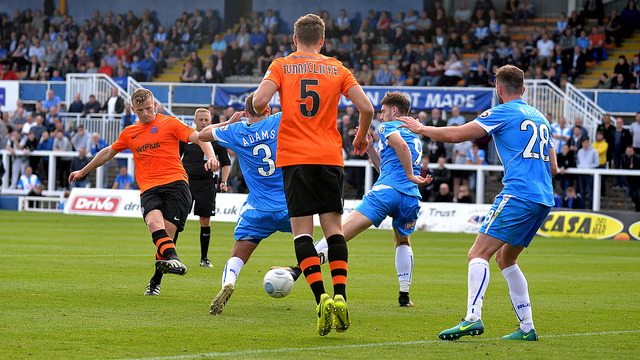 Star striker Danny Rowe etched his name into the club’s record books at the weekend with a goal in the 2-0 victory over Hartlepool United.

Saturday’s victory at Victoria Park was the Coasters’ first in the National League and was extra special for one man in particular.

What makes the record yet more remarkable is the timeframe that Rowe has taken to top the scoring charts.

Rowe has taken just over three season’s to tally up his 120 goals, whilst Saturday’s goal was also his 100th in the league for Fylde.

Manager Dave Challinor was full of praise for his deadly frontman: “It’s a phenomenal record. To get that number of goals in just over three seasons is an amazing effort.

“There are doubters when you step up a division but he has proved them wrong. Even by his own admission, he would have liked to have scored more this season but it will come with confidence. He plays in a tough role but he does it brilliantly.”