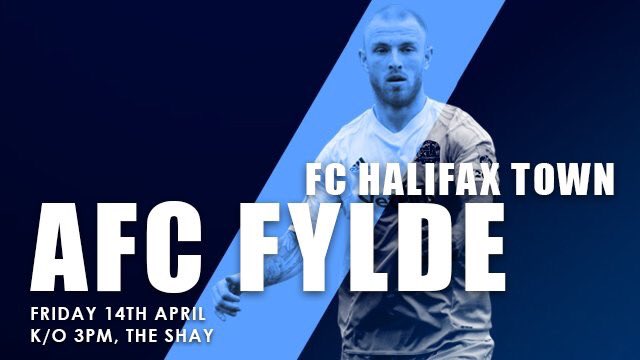 AFC Fylde took a huge step closer to the National League North title after a crucial 1-0 victory over promotion rivals Halifax Town.
Danny Rowe’s record-breaking strike was the difference and although the visitors saw Sam Finley dismissed late on, Dave Challinor’s side held on for a massive three points against third-placed Halifax.
The Coasters lead the table by six points with just three games to play and now need just four points to guarantee the championship.
Manager Challinor named the same side that slipped to defeat at Stalybridge Celtic last weekend.
Both sides looked up for it in the early stages but there was nothing in the way of goalscoring opportunities inside the first ten minutes – Bohan Dixon’s burst into the box the only glimmer of an opening.
The Coasters were certainly the brighter of the two sides and Dixon was against presented with a chance to close in on goal, however his strike was high, wide and not so handsome.
Halifax hit back with their first real threatening situation of the match shortly before the 20-mark when Cliff Moyo was allowed far too much time in the area and fizzed a low ball across the face of ball that needed to be turned around the post by Caspar Hughes.
Moyo went close a few minutes later when Kevin Roberts whipped in a dangerous free-kick but his header across goal was wide of the far post under challenge from Dom Collins.
Rowe had a glorious chance to break the deadlock and surpass the league record when Dom Collins’ header dropped invitingly at his feet ten yards from goal, but his first time strike was well blocked.
The momentum was building for the visitors and only a strong hand from goalkeeper Sam Johnson prevented Andy Bond from opening the scoring after he had cut inside from the left and fired a wicked strike at goal ten minutes before the break.
The hosts had the chance of the afternoon so far shortly before the break when winger Josh MacDonald was played clean through on goal and despite hitting a well struck effort, Fylde stopper Rhys Taylor stood up well to save with his legs.
Fylde’s long-time tormentor Tom Denton had his first chance of the match soon after the restart when he rose well at a corner and glanced a near-post header marginally wide.
Tempers were starting to flare as the second half wore on with both sides struggling to make a real impact on the game. Dan Bradley escaped a card after tangling with Kevin Roberts on the hour mark.
Substitute Matty Kosylo almost made an immediate impact after entering the fray when he cut inside Tom Kennedy and lashed an attempt across goal that flew past Taylor before striking the foot of the post.
How the hosts didn’t have the ball in the back of the net on 69 minutes was a mystery when a free-kick into the box landed at the feet of Scott Garner inside the six yard box however Taylor spread himself and did enough to keep the ball out.
Then, three minutes later, there was a moment to savour for Rowe as the Coasters took the lead. Finley did well to dig out a cross from the right that fell to Rowe 15 yards from goal and the frontman turned his man before wrong-footing Johnson with a low strike into the bottom corner.
Dom Collins had to be alert at the other end to clear off the line from Garner in another frantic goalmouth scramble.
Fylde were made to play the final minutes with ten men when Finley received his marching orders from referee Joe Hull. The midfield man went in for a full-blooded challenge with Josh Wilde and despite the appearing to win the ball, was shown a second yellow card and sent for an early bath.
Halifax were starting to knock on the door with their man advantage and Denton should really have done better from close range when he was picked out by Richard Peniket’s flick on.
Despite some late pressure from the Shaymen and a low drive from Kosylo that was comfortable for Taylor, Fylde held on for a crucial three points.
Halifax: Johnson, Roberts, Wilde, Lynch (Morgan 79), Garner, Hotte, Moyo (Hone 56), Sinnott, Denton, Macdonald (Kosylo 56), Peniket.
Subs not used: Drench, Charles.
AFC Fylde: Taylor, C. Hughes (K. Kennedy 88), Langley, Collins, Kennedy, Bond, Morgan (M. Hughes 90), Finley,
Bradley, Dixon, Rowe (Blinkhorn 90).
Subs not used: Daniels, Baker.
Ref: Joe Hull
Att: 2,368