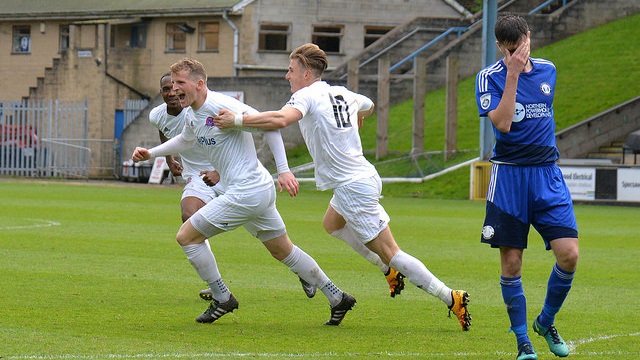 AFC Fylde manager Dave Challinor heaped praise on his side after a 1-0 victory at Halifax Town that has put them ‘on the brink’ of league glory.

The Coasters are within touching distance of the National League North title after a magnificent victory at The Shay and Challinor was understandably delighted with his side.

Challinor said: “The players in that dressing room continually prove people wrong. They’ve done it all season. They’ve put in a monumental effort to win that game.

“It was backs to the wall in the second half but we’ve got ourselves a goal and defended manfully. We really were all hands on deck and people have taken responsibility and got us a fantastic result to put us on the brink.

“It’s scary the way things can work out. We spoke last week about our 100th goal of the season and saying that Rowey deserves to score it for what he’s done this season. And then yesterday morning my missus said that she had a dream that we won 1-0 and Rowey scored.

“We had to dig in and we played very similarly to how we played against Darlington. We’d spoken before the game about it being a challenge to us as potential champions. They’ve given everything and proved any doubters wrong.”