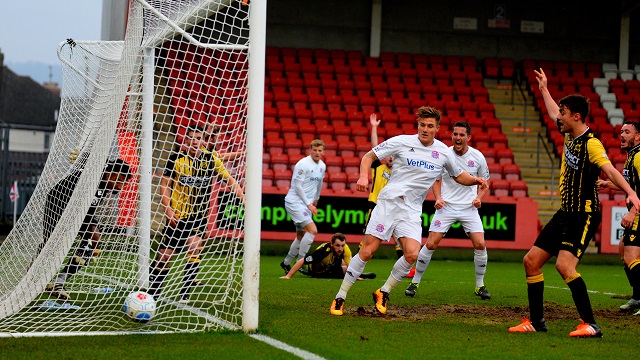 AFC Fylde record signing Dan Bradley was relieved to put the disappointment of the FA Trophy behind him with an emphatic victory over Gloucester City.

The Coasters suffered a heavy defeat at the hands of Brackley Town a week ago but were back to winning ways at the weekend as they maintained their seven point lead at the top of the National League North.

Bradley got himself onto the scoresheet during the 5-1 victory at Whaddon Road and insists it was important to get some momentum back.

Bradley said: “After the game there a few weeks ago we probably didn’t expect to go and win so comfortably. We have played them twice already this season and they have both been really tight games.

“It was the perfect end to a tough week after the defeat in the FA Trophy. We knew we needed to put a performance and the lads have done that.

“We spoke before the game about how important it was to make a bright start so to go a goal behind so early wasn’t ideal. But we dug in and managed to get the equaliser quite quickly. Going ahead just before half-time was a great time to score and really set us up for the second-half.

“We had to get some momentum back after the Brackley defeat. There have been games where we haven’t always played well this year but having some momentum has carried us through and more often than not we have got the right result.”

Bradley has been in a regular in the side following his switch from Alfreton Town, playing in a number of positions including right-back, but was pleased to be back in his familiar wing berth.

“Wherever I’m asked to play, I’ll play,” added Bradley. “I’m not going to question the gaffer. However, I much prefer playing in midfield and I think I did a lot better there.

“Games like Saturday suit me because it was quite open, especially after half-time. I like to make those runs in behind and we managed to score goals at the right times. I’d take a 5-1 win away from home any day.

Next up in the league for the Coasters is the huge Boxing Day clash against Chorley and Bradley is relishing the prospect of record crowd at Mill Farm.

“Mill Farm is already a lovely place to play at but with a potentially record crowd on Boxing Day it should be even more special. Hopefully we can just take it in our stride.

“It’s a massive week over Christmas with two games against Chorley and we are really looking forward to it. Hopefully we can kick on and continue our form in the league.”