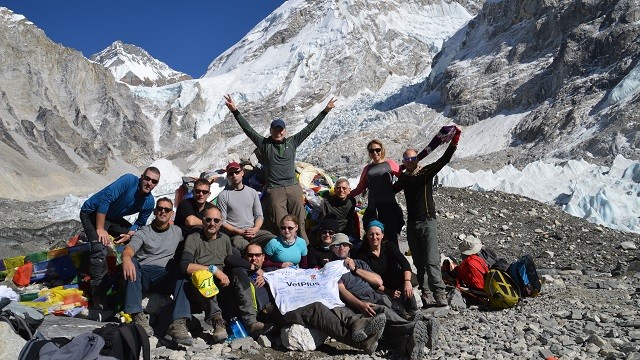 Whilst his beloved AFC Fylde are climbing the football pyramid on the football pitch, stadium manager Keith Wilding decided to go one better off it.

The former Fylde player pushed himself to the limit last month when he scaled halfway up Mount Everest – the world’s tallest peak – and he even left a little piece of Coasters’ history up there for good measure.

Keith admitted he thoroughly enjoyed the expedition and his team have already raised over £2,000 for charity.

“My friend Colin Sutcliffe, who also played for Fylde, asked if I wanted to do Kilimanjaro as a something to cross off the bucket list,” said Keith. “In the meantime, one of his friends suggested the Everest base camp climb so we agreed to do that instead. There was four of us together in a group of 16 that did the climb.

“We decided to do it for a charity that helped Colin’s granddaughter. She is only four years old and she has a rare condition called PKU, where she can’t assimilate protein. We want to raise as much as possible for research to help cure the condition.

“We set off early November and the trip was 19 days in total. We flew from Manchester to Doha in Qatar, then on to Kathmandu in Nepal. From there we got on a small plane to a place called Lukla.

“The runway there was built by Edmund Hillary, the first man to reach the summit of Everest, and that was some experience! It’s the length of a football pitch on the side of a mountain, 3,000 metres above sea level. There is very little space to land and you could either hit the mountain at the end of the runway or drop off the edge!

“Once we arrived in Lukla, we didn’t see another vehicle for the rest of the trip. Everything is carried on donkeys and yaks and hybrids that are a mixture of the two.

“There is a pre-planned route before we set off and they have these places called teahouses that are basically like youth hostels and you move from one to another along the way.

“All our luggage was loaded on to the yaks every morning and they set off and then we would follow with just the equipment we needed for the day.

“Because of the altitude we had to climb slightly higher than where we slept each night, so we would go up further and then come down a bit to sleep.

“We also incorporated the Gokyo lakes too, which added distance on to the journey, but it was well worth it. They were spectacular.

“Along the way we came to a Sherpa Tenzing memorial, for the man that joined Hillary on the first trek up the mountain, and he is quite a celebrity over in Nepal.

“We walked along a glacier and came to the point where three glaciers met and that was quite some sight. We finished the trip 5,550 meters above sea level, which is a couple of hundred metres above base camp.

“Only 1,200 people have ever reached the top of Everest and around 200 of those died on the way back down, so basecamp was high enough for us!

“We took an AFC Fylde shirt with us, which we got signed by all the people on the trek, and we pinned it up in a teahouse at base camp.

“It isn’t for the faint hearted, it’s quite a severe test. You couldn’t just turn up and do it. We trained in the Lake District every weekend for nine months before we attempted it. It was difficult and two of the team didn’t make it up. I found personally that the training we had done came in handy.

“The Gokyo lakes were probably my stand-out memory of the trip. There are three lakes in stages, one around 100 metres higher than the other and they feed down into one another. The colour of the water is incredible, so blue. With the backdrop of snow-capped mountains, the view was just breath taking.

“The weather and temperature was very varied – during the day it was like a hot summer’s day yet at night it got down to -10!

“There was no electricity, no running water, no flushing toilets, so it was all very much back to basics and that was nice at times, but I’d have loved something like an ice-cream!

“We had to avoid quite a lot of the food because of the chance of disease and water doesn’t boil so we had to drink bottled water.

“They would sell snacks at the teahouses, but most of my provisions went on bottled water. I was drinking two or three litres a day through a pipe that comes around from your pack to your mouth.

“The food was predominantly rice and noodles and I lost over a stone during the trip.

“It was a fantastic experience. I don’t think I could do it again, but I’m really pleased to have it ticked off the list.”

If you would like to donate to the worthwhile cause, please visit www.justgiving.com/Colin-Sutcliffe