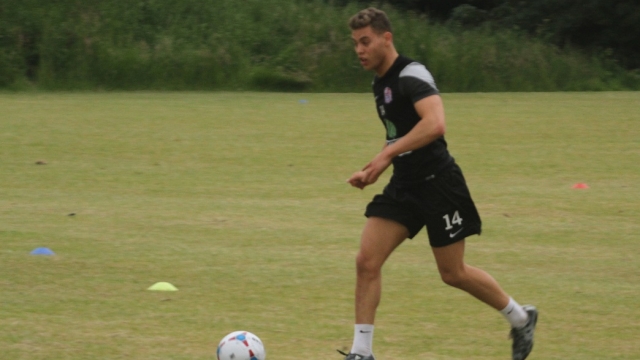 AFC Fylde’s Dave Challinor spoke to Ben Yaffe after the 1-1 draw at home to Bolton Wanderers, giving his thoughts about the entertaining game whilst also outlining the plan for the remaining two games of pre-season against Skelmersdale and Blackburn Rovers in the coming week.

The Coasters managed to gain a 1-1 draw against a credible Football League side this evening. Did the game pan out as expected and were you happy?

It was another great workout for us and it would have been nice to stick our first half chances away which we probably should have done a little better with. In essence it was great for us to be challenged to play in a different way than we would normally play which will set us in good stead for the first game of the season against Solihull which again will be a different system. We have to cover all the bases. We played really well but obviously it would have been good to stick away our chances. To keep going and to get a draw out of the game is great and we’re well on the way to being where we need to be for August 8th.

Dion Charles (pictured above ) was named Man of the Match, what did you make of his performance tonight and has he impressed you throughout pre-season so far?

He did really well in the first half and got the better of his man a number of times. Second half, it took him a while to get back into the game but when he did he made it count. We got quite a bit of joy in wide areas tonight and he did really well. He did well, but he knows he needs to be more consistent with his performances on the pitch and defensively he needs to look after the ball a bit better but he’s got to play games to get experience of those situations we need him for. He’s only young and he’s always learning.

He looked confident when stepping up to score the equalizer from the penalty spot, is it surprising to see a young player with so much confidence?

I wasn’t surprised that he wanted to take it and he is a confident lad. There’s nothing worse than someone really wanting to take a penalty and then missing it but Dion has shown over the course of the end of last season and the start of this season that he’s confident and wants to be involved with big decisions in games. Neither of the regular takers (Allen and Rowe) were on the pitch so he did the business. Obviously results aren’t important during pre-season but Dion put away the penalty and we did deserve to take something from the game.

Any news on why Caspar Hughes and Matty Hughes didn’t play in this game?

Caspar had a minor operation on his nose that had been scheduled right the way through the summer and will be out for probably between five days and a week. He’ll probably miss the Skem game on Saturday but could be back next Tuesday. Matty has a slight sprain on his toe, he had an x-ray after the Nantwich game to make sure nothing was broken and he should be fine. We’re training tomorrow so hopefully we’ll do a little bit with him, but we’re not sure about Saturday yet. He does need games but we need to make sure he’s right and not playing on an injury at all. It’s a long season and we don’t want a threat of something keeping him out for any longer than he needs to be out for so there’s no rush. It’s a case of how much pain he can put up with in order to play. We’ll know more on Thursday at training.

Two games left of pre-season now. Will you be selecting your teams with Solihull in mind or will you still rotate the squad up until the start of the season?

It’ll still be mixed up for now as I’m still not sure what my strongest starting eleven is and everyone is still fighting for places. The first game of the season against Solihull will give us a different challenge again and a different shape to play against. Whether or not we change our system to counteract theirs will be something we need to look at closer to the time and tonight’s given us a good look at a different system so that can only benefit us. We’ll work now towards the first game of the season and take these two games as they come. We’ll be working more on set-pieces in the coming week and before you know it we’ll be playing our first game of the league season a week on Saturday.

The next pre-season game is Saturday 1st August away at Skelmersdale (3pm kick off) before a home game against Blackburn Rovers on Tuesday 4th August at Kellamergh Park (7:30pm kick off). Tickets for the home match with Blackburn are priced at £8 adults, £5 concessions and free to all U16’s.