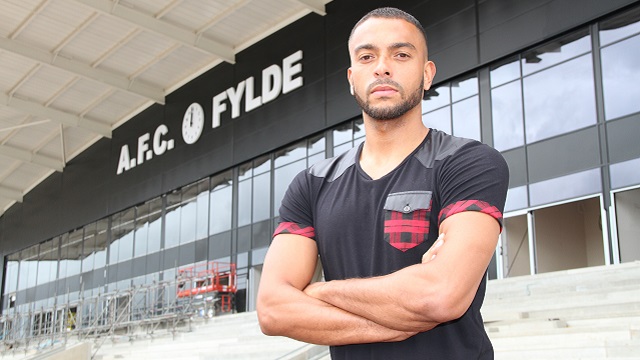 The towering centre-half spent last season with the National League side, but turned down a new deal in favour of a move ‘back home’ with the Coasters.

Williams admits he can’t wait to get started at the club and is keen to help Fylde achieve their Football League dream.

“We originally had talks a couple of years ago before I signed for Halifax,” said the 29-year-old. “So joining the club has always been in the back of my mind. I am a local lad so it’s something that I’ve thought about for a while.

“I spoke to the manager again at the end of this season and it seemed like the right time to sign, especially with the club making a real effort to get out of the league. It’s something I aspire to and want to help the club achieve.

“I think the deal is a positive move for both parties. With my experience and the club’s ambition, we should be able to help each other reach those targets next season.

“I don’t see the move as dropping down a division. I fully believe that I’ll be back playing in the Conference next season with Fylde, so that drives me on.

“Yes, the club is in a league below but in 12 months time I’ll be playing back at that level but with a club that’s on the up. I’m looking at the bigger picture rather than just this season.”

Williams already has plenty of Football League experience having made close on a century of appearances for Bradford City and is now hoping to guide the Coasters to that level playing the ‘proper way’.

“I played almost 100 league games for Bradford and that’s ultimately what I want to get back to. Living in the area gives me even more desire to get there with a local club. I’d love to make history with the club and help get them to that level.

“I’ve played in the Conference for a couple of years and it’s a very difficult league to get out of. There are a few clubs paying big money for players and they still struggle to get out, but hopefully during my time with the club we can achieve that.

“Another pull for me was the style of play that the gaffer has instilled into the team. When I played against Fylde for Barrow in the FA Cup last season I thought they were the better footballing side and that really appealed to me.

“It’s about teaching the right philosophy and if we do go up then we will be one of the few teams that plays the proper way.

“It’s only about five weeks away from pre-season now so I just want to maintain my fitness levels so I can make the best start possible.

“Everyone who loves football gets that feeling when you get into pre-season that it’s all gearing up again and I’m no different. I can’t wait to get started and I’m feeling very enthusiastic about next season.”

The former Chorley defender will be looking to fill the void left by the departing Tom Hannigan, but he admits that doesn’t faze him.

“I don’t really see it that way, I just want to come here and do my job. I don’t see it as having to fill anyone’s shoes. I have enough confidence in my own ability to be the man in that position.

“Strong and commanding is something that’s stuck with me throughout my career. I’m a ball playing centre-half but having played in the Conference for a while I know football doesn’t always work like that and you have to be solid. Sometimes you have to play ugly and I have adapted to that side too.

“I want to become an all-round better player so it will be interesting to see how exactly the gaffer wants us to play next year. It always depends on the opposition and sometimes he might want us to be more robust, but either way we will be doing everything to get ourselves promoted.”