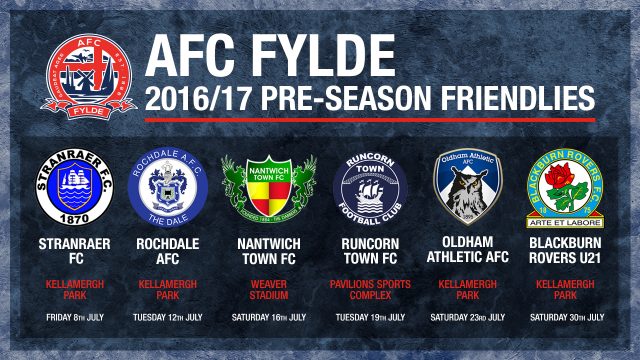 AFC Fylde are delighted to announce their pre-season friendly schedule ahead of the 2016-17 Vanarama National League North season.

The Coasters move to the fantastic new stadium at Mill Farm this summer, but will complete their pre-season at Kellamergh Park before the Brett Ormerod curtain raiser at the new ground.

Dave Challinor’s troops kick-off their warm-up campaign at Kellamergh Park against Scottish Division One side Stranraer on Friday 8th July, before welcoming League One side Rochdale four days later.

Away trips to Nantwich Town of the Evo-Stik Premier Division and Runcorn Town are followed up by a home game against Oldham Athletic.

The final pre-season outing ahead of the opener at Mill Farm is the visit of Blackburn Rovers U21s. The Coasters recorded a resounding 5-1 victory over the Championship side in the lead up to last season.

Ticket and further details will be announced at a later date.