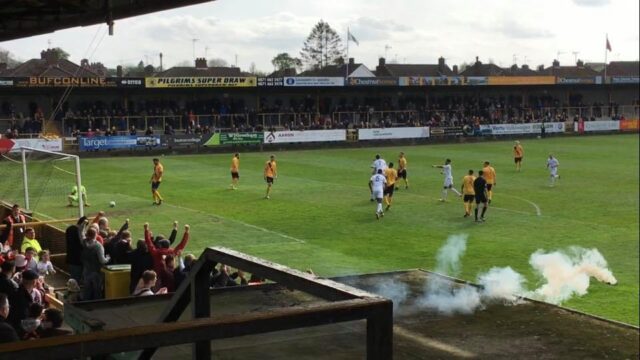 Our next team ‘under review’, is Boston United.

Andi Thanoj – The talented playmaker scored 7 goals in 32 appearances for the Pilgrims last season, forming a formidable partnership with Brad Abbott in the United midfield. Originally from Albania, Thanoj has also enjoyed spells in the National League North with Alfreton Town and Harrogate Town.

Craig Elliott – The former Shaw Lane boss was appointed manager of Boston in November 2017 after guiding the former Barnsley based club to three promotions. He almost achieved his first promotion with the Pilgrims last season as they lost out in the play-off final to Altrincham earlier this month.

The last meeting between the sides in April 2017 was an unforgettable day for Coasters fans. A brace from Danny Rowe and a goal from Matty Hughes earned a comfortable 3-0 win at York Street to seal the National League North title with a game to spare.

The distance from Mill Farm to Pilgrim Way is  174.6 miles via the M62 motorway and should take approximately 3 hours to drive.