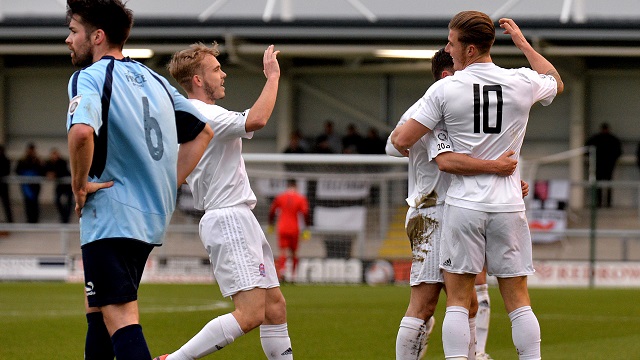 “Still in a great position” – Chally

AFC Fylde manager Dave Challinor has urged his squad to stick together as the season heads towards a potentially thrilling climax.

The Coasters have enjoyed a magnificent campaign to date and remain top of the National League North table by seven points despite awful luck with injuries of late.

Captain Josh Langley was the latest key man to be struck down by the injury curse during the 1-1 draw with AFC Telford United on Saturday, leaving Challinor with just one fit centre-half in loanee Dan Jones.

Whilst Challinor was disappointed to miss out on maximum points at the weekend, the Coasters boss insists there is certainly no need to panic.

“Nothing has changed,” said Challinor. “We are still in a very good position.

“Every team has a sticky patch during a season, whether it be with injuries or disappointing results. The key is to stick together. We can’t feel sorry for ourselves, we have to be brave.

“In the end it can probably be seen as a decent point considering the difficult circumstances. We already had two centre-halves out injured so to lose Josh was less than ideal.

“We had to reshuffle and drop Bondy back into defence but we still dug out a result.

“We have to keep picking up points and whilst the last two results haven’t gone entirely to plan, we still haven’t lost consecutive games all season and I think that is very important.

“Now is the time to stand up and be counted. We are by no means under pressure. We just have to get on with it.”

Despite being thrust straight into the starting line-up, Challinor was delighted with the display of new signing Dan Jones, who joined the club last week on loan from Grimsby Town.

“There were some very encouraging signs from Dan. He was solid at the back and looked a threat going forward.

“He did very well in difficult circumstances. It was a very positive start and he could prove to be a big asset for us.”

The Coasters have also been boosted by the potential return of midfielder Sam Finley, who has been out since November with Ulcerative Colitis. The 24-year-old returned to training this week and could make a welcome return to the team before the end of the season.

“Sam has joined in training, which is great news. He is still a bit away in terms of fitness and it might be at least another month yet but it will be a huge plus when he is back.”