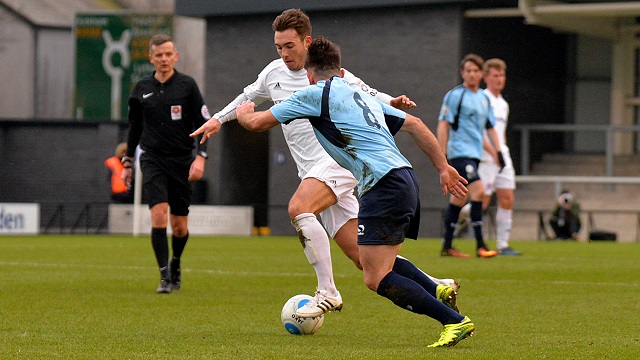 AFC Fylde new boy Dan Jones admits he is delighted to be back playing football following his loan move from Grimsby Town.

The 22-year-old defender made his Coasters debut just 24 hours after arriving at the club in the 1-1 draw against AFC Telford United on Saturday.

Jones has struggled for a starting spot in the Grimsby team since joining from Hartlepool United in the summer and was sent out on loan to Gateshead earlier in the season.

The youngster will now spend a month on loan at Mill Farm and is relishing the prospect of regular football with the Coasters.

“I really enjoyed my debut. It was great to be back out there on the pitch. My last game was back in November so it feels like a long time since I have played football.

“It’s vitally important for my development to be getting games at my age. I was sitting on the bench at Grimsby and that’s not what I wanted. I wanted to get out there and gain some experience. Every league is different so you can learn something from every game.

“As soon as the manager at Grimsby said that Fylde were interested I was keen to come here. Coming to a full-time set up, who are doing really well in the league was a no brainer really.

“It’s nice to come into a winning team and hopefully I can help them towards their goal of winning this league.”

A left-back by trade, Jones was deployed as a centre-half by manager Dave Challinor due to injuries in his defensive ranks and admits he enjoyed his battle with veteran striker Lee Hughes.

“I have been used to playing at the left of a back three or at left-back which has given me more license to get forward. But I enjoyed playing at centre-half and I still got the opportunity to step inside and get forward to help the team.

“I have played against him (Hughes) before when he was at Notts County. He puts himself about and makes a nuisance of himself, but it was a good battle between us.

“Maybe the result wasn’t exactly what we were after, but we battled well and got something from the game.”