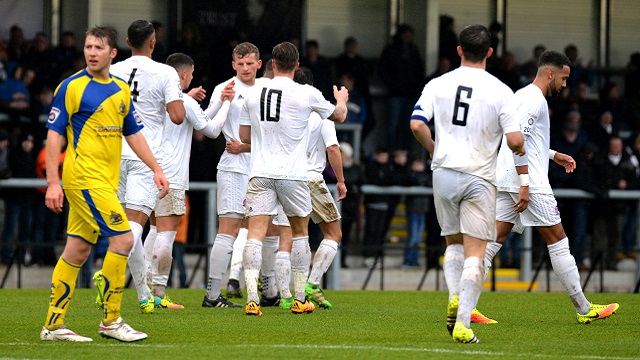 Rowey has no plans to ‘ease up’

AFC Fylde star Danny Rowe was delighted to be back amongst the goals after helping his side to a comfortable 4-1 victory over struggling Altrincham at the weekend.

Rowe suffered somewhat of a ‘goal drought’ by his standards over turn of the year, but after a three-game dry spell, the hitman has three goals in as many games over the past week, including two stunning strikes against the rock-bottom Robins on Saturday.

The frontman, who celebrated his 28th birthday on Sunday, now has 35 goals in the National League North this term – over twice as many as any other player – and has no plans to let up as the Coasters continue their promotion push.

“I got one against Curzon Ashton after a few games without a goal,” said Rowe. “But the performance wasn’t good and we obviously ended up losing. So it was much better to get a couple of goals this weekend and win the game.

“We have won four of our five games this year and we have to keep that going.

“Even when I’ve gone a couple of games without scoring, I’m still very confident because I’ve scored a lot of goals this season.

“Promotion is a massive thing for me on a personal level as well as from a club point of view. At the same time I’d be lying if I said I don’t look at the goal charts too.

“I want to be the top scorer in the league and whilst I am quite a few clear already, I never lose that desire to score more and more to pull away even further.”

Blackpool loanee Macauley Wilson bagged his first goal in Fylde colours on Saturday moments after Rowe was denied a first-half hat-trick by Altrincham stopper Tim Deasy – a moment described in jest as bitter-sweet by the striker.

“I should have scored really so he shouldn’t have had the chance!” joked Rowe. “It was probably my best chance of the three but it probably wasn’t as easy as it looked at the time in the conditions.

“I thought I had done enough but the keeper made a decent save and Macca was in the right place to finish it off. So I’m very pleased for him, but I’d have been more pleased if it had completed my hat-trick!”

Dave Challinor’s title chasers travel to in-form Salford City this weekend and Rowe insists his side must be wary of the hosts, who moved up to third in the league following a 3-0 victory over arch-rivals FC United of Manchester.

“It’s going to be a big test for us against Salford. They are a good side and they are up there, not too far behind us.

“First and foremost, of course we want to win, but it’s hugely important that we don’t lose. I don’t think we will be playing expansive, open football or going all-out for a win. We will be going with a game plan to get a positive result.”