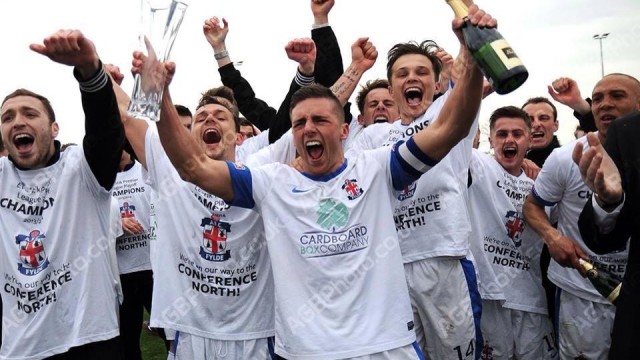 AFC Fylde’s dream of promotion to the Conference North was finally realised thanks to a 4-3 penalty shoot-out win over Ashton United in front of a fantastic crowd of 1,191 at Kellamergh Park on Saturday.

The Coasters fell behind to a seventh minute Martin Pilkington strike but Sean Cooke came off the bench to level the tie with 20 minutes to go of normal time.

Despite the best efforts no winner could be found for either side, even with four Fylde efforts cleared off the line by Ashton, and it was down to goalkeeper Ben Hinchliffe to step up and smash home the winning penalty in the last kick of the shoot-out.

The Robbins, who had shocked many non-league fans by snatching a win at Gigg Lane on Tuesday night to knock out FC United of Manchester, came to Kellamergh Park with a clear game plan and for the first 70 minutes it worked as Fylde struggled to break down a resolute defence headed by left-back Chris Lynch and joint player-manager Paul Phillips between the sticks.

But all credit to Ashton, they took the game to their hosts in the first quarter and were rewarded with an early goal just seven minutes into the game when a mix-up between Hinchliffe and centre-back Josh Langley allowed Robbins’ top goal scorer Pilkington to tap into an open net.

Chris Baguley should have done better with his strike which was straight at Hinchliffe on 12 minutes and then Pilkington hit the side netting ten minutes later.

It took until the 25th minute for Fylde to get their first shot on goal.  Adam Sumner’s pin-point cross found Michael Barnes at the far post, but the Fylde winger could only send his header over the bar from six yards.

Joe Booth shot wide on 32 minutes before sending a searching free kick into the mix ten minutes later only for Mike Barnes’ bicycle kick to deflect wide for a corner.

From that corner, Matt Blinkhorn was very unlucky not to find the target with a header of his own, sending his effort over the bar from close range as well.

Fylde came out strong for the second half going in search of a much needed equaliser.  Allen came close only to be denied by Phillips from point-blank range five minutes in, then Dave Hankin shot over two minutes on.

And just a minute later, an excellent 60-yard ball from Brad Barnes found his name-sake Mike racing into the area but an Ashton defender managed to track back and block his shot.

A rare sight on goal for the visitors saw Kayde Coppin shoot wide from distance before normal service was resumed and two big shouts for a penalty for fouls on Blinkhorn within four minutes were waved away by referee Gareth Mellor.

But Fylde finally struck gold when Blinkhorn found some space on the right of the area, played it back to Cooke who fired left-footed into the net to bring the scores level on 70 minutes.

A minute later, Fylde thought they had the lead when a corner was swung in from the left and man-of-the-match Harry Winter met the ball with a thundering downward header which was punched off the line by Phillips.

The game became more and more nervy for both sets of fans as the match neared full time.  Neither side could work a clear effort on goal with Allen seeing a couple of half chances go begging while Matt Chadwick couldn’t keep his header on target with five minutes to go.

Into extra time and Hinchliffe pulled off a great save to deny Chadwick three minutes in and then the moment of the match almost fell for Cooke in first half stoppage time.

Seeing Phillips off his line, he went for the spectacular, lobbing the Ashton keeper from 30-odd yards only to see the ball bounce off the underside of the crossbar, bounce in front of the line and into Phillips’ arms.

The best chance after that fell to Allen who was denied by a clearance off the line with five minutes to go meaning the game would go to penalties.

Adam Sumner missed Fylde’s first penalty after Ashley Young had scored for Ashton, but Pilkington’s spot-kick was saved by Hinchliffe and Gary Gee hit the bar as Richie Allen, Danny Lloyd then Cooke brought Fylde level at 3-3 after five penalties for Ashton and four for The Coasters, which allowed Hinchliffe to smash home the winner with the last kick of the shoot-out.

Fylde boss Dave Challinor commended his players for a fine season after the match and said of this win: “It’s a great feeling, a massive relief and we’ve deserved it over the course of the season.

“I thought in the first half we were awful and the game looked a little bit too big for a couple of them.  We knew how Ashton would set up in order to try and stop us playing and frustrate us as that’s how they played on Tuesday at FC United.

“We gave them a goal which then gave them something to hold on to and made it difficult for ourselves.  There were more than a few harsh words said at half time and we looked for a reaction and in fairness we were brilliant in the second half.

“We equalised and did everything we could to win the game, even in extra time when there was a lot of tired legs we created chances and with penalties your always worried but to win in that manor, there’s no better way of getting promoted than through a play-off and winning on penalties has a massive highs and lows of emotion.”

Challinor added: “We’re going to enjoy the next couple of days and look forward to next season in a new division.”

So after five years in the Northern Premier League, The Coasters will begin a new chapter in the Conference North from next season one step closer to that 2022 dream.