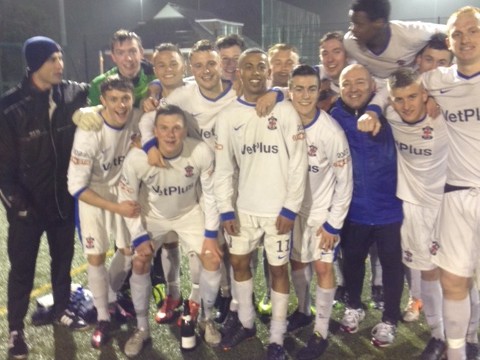 AFC Fylde’s Development Squad will cap off a fine season in the Lancashire League on Tuesday night as they play host to Stalybridge Celtic at Kellamergh Park in their final league game of the 2013/14 season.

The game originally was scheduled to be played at Stalybridge’s Bower Fold home but due to drainage problems the game has been switched to Kellamergh Park, giving the club’s young stars the opportunity to play in front of what is expected to be a bumper crowd on Tuesday night.

With the league championship already taken care of the players will be looking to enjoy the occasion and go out and impress in their final game.  Stalybridge will have other ideas though as they push for the points that will secure a runners up place.

Manager Andy Pilkington said ahead of the game: “It will be a great occasion for the players and an opportunity to show what they can do.

“I’ve said before that winning the league has been a great achievement and it’s nice that we can receive the trophy after the game at our own ground but we have a job to do first and will approach the game professionally and try to finish off the season on a high.”

The previous meeting between the sides was played at Preston’s College earlier in the season with the Coasters running out 10-0 winners, but Pilkington is expecting a different game this time around.

He added: “It would be very easy people to look at the game and think that the jobs been done already and that based on last time we should record an easy victory.  Absolute nonsense!  Stalybridge were unfortunate enough to have personnel problems that night and weren’t helped when their Keeper was injured and had to go off.

“They will have a stronger squad this time around and still have something to play for in terms of their league position, they will be up for it, without a doubt.  The lads will approach the game like any other and will be aiming to record another win whilst doing things right.”

Following the game the team will be presented with the Lancashire League West Division Trophy and a large crowd is expected for the game as the curtain comes down on another highly successful season at AFC Fylde.

The game kicks off at 7:45pm and entry is FREE.

Come on you Coasters!!!!