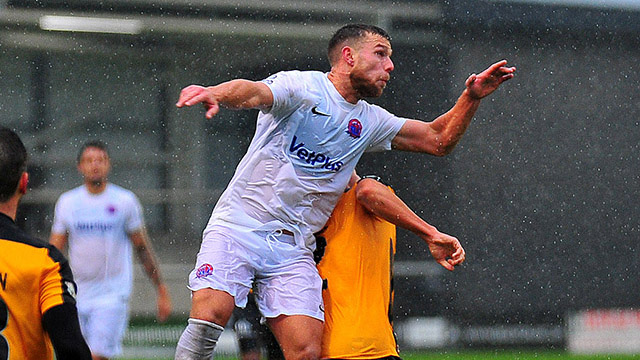 “It’s grim up north,” was the half-time verdict of a Maidstone United supporter, hunched over in the away end, hood covering half of his rain drenched face.

And grim it was as the thrills and spills were cut short at Mill Farm midway through this afternoon’s National League washout against our southern counterparts.

Dreadful weather conditions had made for an entertaining first-half and goals from Fylde captain Sam Finley and Jack Muldoon, either side of Joe Pigott’s strike, had seen the saturated hosts go into the break ahead.

However, referee Marc Edwards put a halt to proceedings three minutes after the break when deteriorating conditions made the pitch unplayable, despite the best efforts of the ground staff.

Manager Dave Challinor had made one change to the side that saw off Wrexham in the FA Cup last weekend with Jordan Tunnicliffe returning from injury to replace Jordan Richards.

The early stages were understandably stop-start due to the driving rain and howling winds of Storm Brian. Maidstone threatened with a couple of dangerous corners that were lapped up by the Coasters new-look back three.

Full-back Zaine Francis-Angol fired a sighter from long range as the Coasters looked to get a foothold in the game and Stones stopper Lee Worgan had to be on his toes to keep out Muldoon’s glancing header at the near post.

And the early pressure paid dividends as Fylde took the lead. Finley shrugged off his marker on the edge of the area before lashing a low drive into the bottom right out of the reach Worgan.

The visitors were presented with a glorious opportunity to level the scores shortly after the 20-minute mark when a neat one-two saw Joe Pigott race down the left before putting the ball on a plate Delano Sam-Yorke, however the frontman put his effort just wide of the post and himself straight into it.

Maidstone didn’t have to wait long for an equaliser and the Coasters backline will have been desperately disappointed with the manner of the goal. A long ball forward was easily collected by the unmarked Pigott and even more simply slotted past Jay Lynch in the Fylde goal.

A clever corner kick routine went close to putting the hosts back in control when Finley played short to Rowe whose vicious strike was blocked by a wall of bodies on the line.

However, the Coasters were back in front just seconds later. A corner dropped to Rowe who turned his man before lashing a strike towards the far post that was diverted into the gaping goal by Muldoon.

There was still time for a moment of magic before the break to keep Maidstone at bay. George Edmundson made a mess of his challenge on Pigott in the area, leaving the forward with a free hit at goal, however, to his and crowd’s bewilderment, Lynch pulled off the save of the season to deny him at point-blank range.

Grand headed narrowly wide at the far post as the half time whistle blew and although the two teams made their way out for the second period, they were called back in just three minutes later and the match was abandoned.