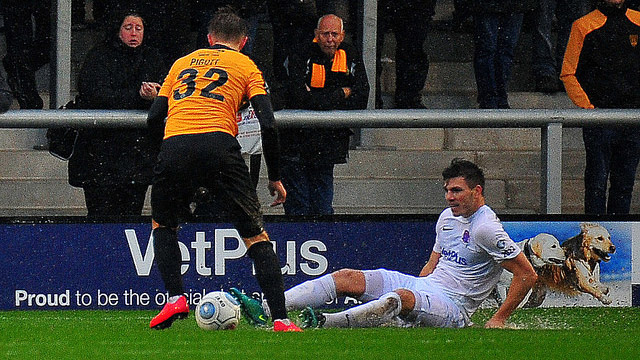 AFC Fylde manager Dave Challinor was frustrated but accepting of the decision to abandon yesterday’s National League fixture against Maidstone United.
The Coasters were leading the match 2-1 when referee Marc Edwards put a halt to proceedings and both managers reluctantly agreed with the decision.
Challinor said: “It was never going to be be a great spectacle with 60 miles an hour winds and driving rain. The referee was asking questions as to what we thought but at the end of the day it was irrelevant.
“You can’t play football when the pitch gets like that even though both clubs and both sets of fans would have like to have seen the game finished.
“Maidstone won’t want to come back up here on a Tuesday night and we are disappointed because we were in the lead. We got onto the front foot and didn’t over-complicate it. Both sides had opportunities but we have to write it off now and look forward to another home game against Wrexham on Tuesday.”
Stone’s boss Jay Saunders echoed the thoughts of his counterpart: “I thought it was quite a close game in the first half, but the weather took over. The ball was stopping all over the pitch and we knew that was going to be the end of it.
“I was disappointed with the goals we conceded but with the wind against us it was very difficult, as Fylde would have no doubt found out in the second half. We would have far preferred to got the game done and dusted on the day but it had become dangerous and it was the correct decision to call the game off.”