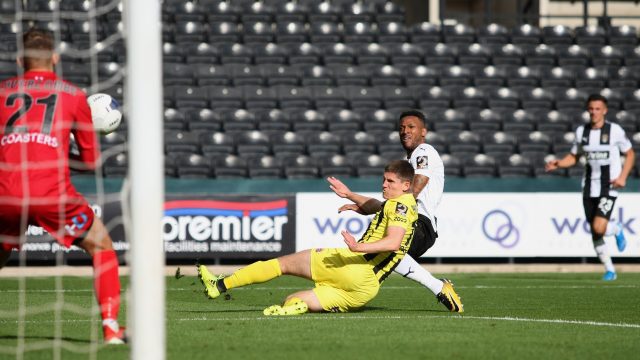 The Coasters winning run came to an end at Meadow Lane, as a goal each half was enough for Notts County to win in front of a bumper crowd.

AFC Fylde made two changes from the side that started against Wrexham – with Haughton and Bradley doing enough in midweek to cement starting spots.

Notts County, who had won midweek at struggling Boreham Wood, were unchanged – with Woottoon leading the line.

The Coasters started on the front foot, with Philliskirk’s perfectly weighted ball over the top finding the in-form Dan Bradley.

Bradley’s first time cut back however couldn’t find a yellow shirt, and County were able to clear for a corner, which came to nothing.

In the next move, Croasdale was very nearly found one-on-one – however Sam Slocombe was quick off his line to stop the danger.

Haughton, who had been in superb form midweek against Wrexham, looked up for it in the opening exchanges, and opened up the game with a fantastic run – before being blocked off by McCrory 20 yards from goal.

The games first real chance fell to the hosts, and but for goalkeeper Dan Lavercombe, would have seen County take the lead.

Sam Osborne caught a half volley sweetly and sent it in search of the top corner, but Lavercombe was on hand to deny him superbly, tipping it behind for a corner.

Moments later, Wes Thomas had the chance to prod home a loose corner – but once more, Lavercombe was there to deny the goal, this time from point-blank range.

This pressure eventually told, and County opened the scoring in the 18th through Wes Thomas.

It was all too easy for Thomas who shrugged off Jameson and got goal side of him – before striding in, and firing the ball the outstretched challenge of Philliskirk, and beyond Lavercombe.

Before the game could really get going again, a lengthy stoppage followed, as referee Peter Gibbons collided with a Notts County player.

Although the referee tried to continue, it seemed the injury was too much – and fourth official Lee Hartley replaced him.

He was straight into the action, and awarded Fylde a free-kick 35 yards from goal as Nick Haughton was brought down – but Rowe’s effort was over Slocombe’s bar.

With 35 minutes on the clock, the Coasters should have levelled, after Dan Bradley did superbly to find Danny Rowe just ten yards from goal.

Bradley flashed it back across the face of goal where Rowe was poised, but the Fylde number 9 mistimed his effort, and didn’t make enough contact on it to send it goalwards.

He was shown a sight of goal moments later, as Duxbury’s angled ball over the top found the striker, but his touch away from goal gave him too much to do, and the Magpies recovered.

As the game pushed on towards the interval, County came looking for a second, with Booty and Bakayogo combining well to win a corner – but the following routine was fluffed by Osborne.

Danny Rowe went into the book for a late challenge on McCrory, but he could probably count himself a little unlucky – mistimed more than anything.

County went close after the restart as McCrory, who had been in the wars in the first half, headed over from a corner.

The Coasters had their own attacking to do though, and soon after this Haughton’s low cross was turned over his own bar unconvincingly by Rawlinson, as the pressure started ramping up.

This started a spell of sustained pressure for the Coasters, with Danny Rowe being found repeatedly in the box – one low effort blocked behind for a corner.

Next saw the hosts threaten again and, as in the first half, Lavercombe denied Osborne – his side-footed effort from distance saved comfortably.

Nick Haughton flashed a teasing ball across the face of the goal which looked destined to be turned home – but it was missed entirely by Jameson, however his blushes were somewhat spared with an offside flag.

This didn’t dismay the Coasters though, who kept the pressure on – Williams being brought down in the box soon after, but no penalty being given.

The Coasters best chance so far to equalise came as Scott Duxbury’s clever ball evaded everyone and found Williams unmarked inside the 6 yard box.

Williams first time effort was smothered brilliantly by Slocombe however, and from the resulting corner, he denied Nick Haughton’s volley superbly at his front post.

Tactical switches followed for both sides, and whilst the Magpies introduced another defender in the shape of Bird, the Coasters switched Bradley to right back, and bought on former Notts County player Yeates.

It was a switch that paid dividends for, as soon after, the game was won by County from a set piece.

Damien McCrory was on hand to direct a flick-on goalwards –  heading home from inside the box, and sending the 9,000 County fans inside Meadow Lane home with three points.