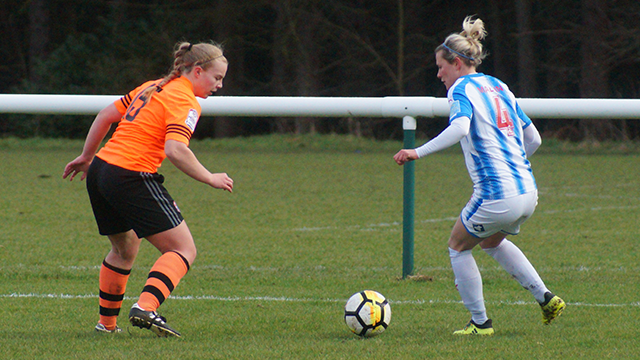 Fylde Ladies slipped to a narrow defeat at Huddersfield Town Ladies last time out in the Women’s Premier League.

After two weeks without a game, the Ladies were keen to get back to action however a single goal from Lucy Sowerby ensured the match ended in disappointment.

The game kicked off at the Stafflex Arena with the home team dominating play and they almost took the lead after just four minutes when Sowerby cut into the box before putting her shot narrowly wide of the onrushing goalkeeper and the far post.

Sophie Charlton and new signing Alys Hinchcliffe had half-chances for the visitors in bright start from both sides.

Hinchcliffe had another great opportunity when she received the ball inside the box but rushed her shot and fired wide.

Fylde were almost the masters of their own downfall midway through the half when Sowerby pounced on some black play between Hannah Mitchell and goalkeeper Rachel Darbyshire. Fortunately, Derbyshire did enough to force Sowerby to shoot wide and spare Fylde’s blushes.

However, thirty-six minutes in and Huddersfield found an opener. The Yorkshire side won a corner and sent the ball flying into the box where Sowerby knocked the ball home unmarked.

Fylde dominated after the break with Hollie Kelsh sending some teasing balls forward that the visitors failed to capitalise on.

Both teams were getting closer as the half wore on. Huddersfield threatened from a corner, only to see Fylde break on the counter however Lauren Davies’ long range strike was comfortable for goalkeeper Laura Carter.

Charlton and Hinchcliffe continued to press the Huddersfield backline, but the equaliser proved elusive.

Fylde Ladies manager Conrad Prendergast was pleased despite the result: “I felt that we controlled the majority of the game, excluding the first 10 minutes where we struggled to get going but that was expected due to a lack of game time throughout December and January.

“Overall I was happy to see a hard-working performance from the players, we defended very well in open play, created a number of chances when in possession and did not deserve to leave empty handed.”

Fylde’s Liv Fuller echoed the the manager’s thoughts: “It was a good team performance and everybody worked hard for each other.

“I thought we were unlucky not to get a draw especially based on our second half performance. We need to build on from this and keep working hard in training ready for next weekend.”

Fylde Ladies are away next Sunday against Birmingham & West Midlands Ladies FC in the next round of the WPL Plate.