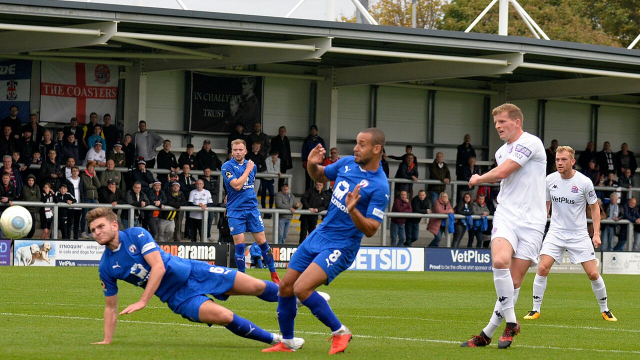 AFC Fylde exited the FA Cup in the Fourth Qualifying Round after a 3-1 defeat to Chesterfield at Mill Farm.

Danny Rowe gave the Coasters an early lead but a Will Evans free-kick and a brace from Tom Denton put the Spireites into the hat for Monday’s First Round draw.

Manager Dave Challinor stuck with the same line up that saw off Maidstone United last week with the only change seeing Gime Toure return to the squad after a month out injured.

The Coasters started brightly and after some nice build-up play Ash Hemmings headed over the first chance of the game from Cardle’s cross from the right.

12 minutes in the Coasters took the lead. A corner from Cardle resulted in some pinball in the penalty area before the ball fell kindly to Danny Rowe who drilled the ball home into the bottom left corner from 15 yards.

The visitors responded and after several minutes of pressure, they got their reward. The Coasters conceded a cheap free kick on the edge of the box and defender Will Evans rifled the ball into the bottom right corner from 25 yards to level the score.

Fylde should have gone back in front almost straight away as Rowe played a defence-splitting pass to an unmarked Cardle down the right wing and he squared for Hardy six yards out but somehow the Chesterfield defence blocked the ball off the line.

Eight minutes later the Spireites were in front. A foul on Tom Denton following a corner gave the referee little option and Denton made no mistake sending Lynch the wrong way from 12 yards.

Fylde came out brightly once again in the second half and were inches from an equaliser six minutes in. A Cardle cross from the right was flicked on by Danny Philliskirk but he could only guide his header just over the bar from 12 yards.

Gime Toure made his return with half an hour left replacing Ryan Croasdale and he almost made an instant impact. Again a cross from Cardle this time to the near post was met by Toure but his acrobatic flick went wide of goal.

20 minutes from time Chesterfield doubled their advantage. The Coasters were slow to react to a corner from the right and Denton made them pay by heading past Lynch from eight yards at the near post.

Ashley Hemmings almost got the Coasters back in the game with five minutes to go when his thunderous effort came back off the crossbar but that was the last of the chances.

Fylde will be looking to bounce back from only their second defeat of the season when they travel to Berkshire to face Maidenhead United on Saturday. The Coasters next home game is on Saturday 30th October when they entertain Gateshead at Mill Farm.