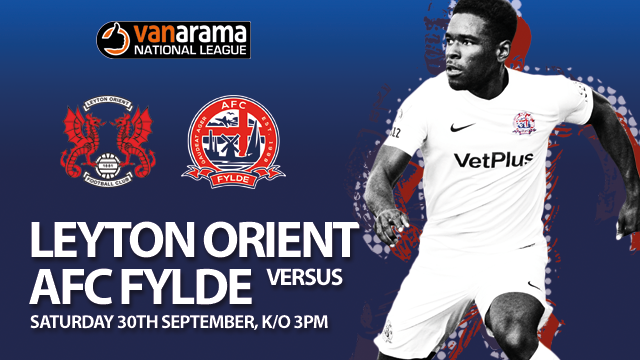 AFC Fylde hit the road again this weekend with a trip to the capital to face Leyton Orient.

Dave Challinor’s side will be keen to get back on track in the National League after five games without victory.

Last time out the Coasters suffered a home defeat to Woking despite leading at the break through Jordan Tunnicliffe’s third goal of the season.

Two goals inside one second-half minute turned the game around to subject Fylde to their fourth defeat of the campaign.

The Coasters sit 20th in the league with 12 points and a record of two wins, six draws and four defeats from 12 games.

Danny Rowe and Henry Jones are currently joint top scorers for the club this term with four goals to their name, whilst defender Tunnicliffe is just one behind.

Orient, managed by Steve Davis, recovered well from a 6-1 drubbing by Bromley in mid-August with 10 points from a possible 12 over the next four games however they have struggled since.

A run of three consecutive defeats this month was halted by a 2-2 draw at Aldershot Town.

The hosts raced into a two-goal lead with strikes in the 9th and 21st minute, but with six minutes of the first half remaining Orient midfielder Craig Clay pulled one back with a header. With time running out the visitors managed to complete their comeback as substitute Boco calmly slotted home the equaliser on the 82nd minute.

Forward Macauley Bonne leads the scoring charts for The O’s with seven goals, just one strike behind league-leader Corey Whitely, who has eight for Dagenham and Redbridge.

Orient find themselves 13th in the table with 17 points and a record of five wins, two draws and five defeats.

Team news:
Sam Finley returned to training today but the weekend may come too soon for the midfielder, whilst James Hardy got some minutes under his belt during a reserve game this week and could be available for selection.

Tickets bought in advance of the day will be available at a reduced rate compared with normal matchday prices at the Matchroom Stadium.

*Concessions apply to over 65s, students with a valid ID card, current serving members of the Armed Forces with proof of affiliation and unemployed with proof of benefit receipt.

Directions:
BY CAR: From North: Exit M25 at junction 27 and follow signs to `London (NE), M11′ onto the M11 southbound. After 7.1 miles where the road divides, bear right (s/p A406 N. Circ. Rd West, London N and W) onto the North Circular Road. Keep in left hand lanes and take first exit after 0.6 miles (s/p Walthamstow and City A104, then Whipps Cross A104, West End (A503)). At roundabout turn left (s/p Whipps Cross, Bakers Arms, Walthamstow A503) into Woodford New Road A104. At next roundabout (Whipps Cross) after 1.2 miles, take 2nd exit (s/p A104 Bakers Arms, Leyton) and follow road round to left, towards BP station, into Lea Bridge Road. After 0.5 miles, just after Esso station, turn left at lights (s/p Leyton, Stratford, then Leyton Leisure Lagoon) into Leyton Green Road. Filter left after 0.3 miles and turn left at T-junction into Leyton High Road. After 1.2 miles ground is down sidestreets on RHS.

Parking:
Due to being in a highly residential area, there is limited parking in the immediate area. There is limited on-street parking in the streets surrounding the ground though many of the roads have parking for permit holders only so please take care when parking to avoid penalty fines.