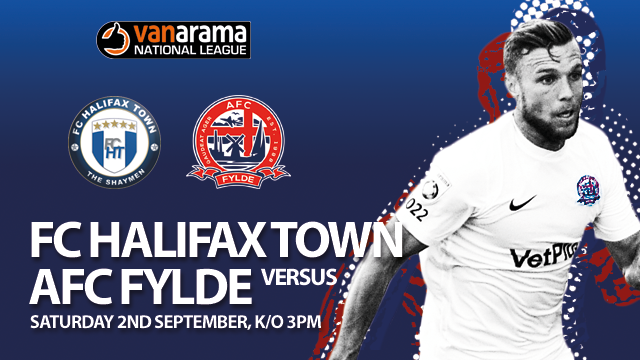 AFC Fylde return to a happy hunting ground this weekend with a trip to FC Halifax Town.

The Coasters all but secured the National League North title with a 1-0 victory at The Shay back in April.

Danny Rowe’s record-breaking strike for the most goals in a NLN season was the difference and although the visitors saw midfielder Sam Finley dismissed late on, Dave Challinor’s side held on for a massive three points against third-placed Halifax.

The victory left Fylde six points clear at the top with just three games to play and the rest, as they say, is history!

Back-to-back victories over the Bank Holiday weekend have seen Challinor’s side turn a solid start to the season into an impressive one.

The Coasters are now one of only four National League teams to have lost just one game or less from the opening seven fixtures.

A fantastic 2-0 victory at Hartlepool United on Saturday was followed up with a gritty 1-0 win over Barrow in front of the TV cameras on Monday evening.

This season’s top scorers Rowe and Henry Jones were on the mark at Victoria Park, whilst James Hardy’s first of the season sealed the points at Mill Farm against rivals Barrow.

The Coasters have moved up into the top half of the season with a record of two wins, four draws and one defeat and currently sit in 12th place, five points off the top of the table and just one off the play-off places.

Halifax – who also won promotion last season via the play-offs – made a slow start to the new season with just two points from their opening four games, scoring just once.

However, their form has picked up recently and they have claimed seven points from their last three outings – Solihull Moors (W1-0), Guiseley (W2-0) and Gateshead (D0-0).

The Shaymen currently occupy 16th place in the table with nine points.

Directions:
By car – take the M62 exiting at junction 24, follow signs for A629 Halifax into Skircoat Road, then onto Shaw Hill where you will find the ground.

By rail – five to ten minutes walk from Halifax station. Leave the car park, turn left and the ground is on your right in 1/2 mile.