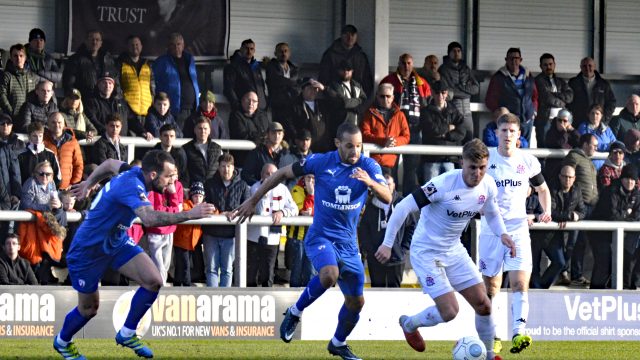 It’s a big one tonight for AFC Fylde.

Late heartbreak for The Coasters on Saturday means tonight’s game against Chesterfield is a crucial one, as we look for a positive result in a bid to climb the table.

Chesterfield are a side who have also struggled this season – which means the game could turn out to be a very interesting one between the two sides.

Luke Burke made his return on Saturday against Torquay, whilst Matty Kosylo served the last game of his suspension, putting him back in contention for tonight’s game.

The signings of goalkeeper Sam Hornby and defender Andy Taylor will bolster Dave Challinor’s options, with Montrose and Willoughby set to miss out.

After a mid-table finish last season, a bad start to the league this year sees The Spireites sit in the relegation zone with only two wins to their name.

Even though Chesterfield have a strong squad on paper, something hasn’t quite clicked for them – which has left them and their supporters wondering what is going wrong.

The Spireites have a very experienced man in John Sheridan leading the side.

Sheridan was publicly backed by the owners recently which sparked a little bit of positivity for The Blues losing only two in their last five games.

Tuesday’s game is also a huge one for Sheridan and his men as they look to climb out of the relegation zone, and a win will take them closer to doing so.

This weeks one to watch is forward, Scott Boden – a player who started his career at The Spireites as a trainee.

Each season, Boden has been with a new team though, some of them include the likes of Newport County, Inverness Caledonian Thistle and most recently, Gateshead United.

Boden signed for Chesterfield in January 2019 and has hit the ground running since his return. He has made 28 appearances, scoring 16 goals.

He has also started this season well as well, leading Chesterfield’s goal scoring chart with six goals in 14 appearances.

His most recent goal came in Chesterfields 2-1 win over Aldershot Town.

This will be the third time both sides have met, with The Spireites currently having the upper hand on victories.

An almost full fixture list is being played out in the National League tonight, as the international games also get underway.

Here are the games to keep an eye out for:

There will also be full match commentary on Coasters Live for those who can’t make it.