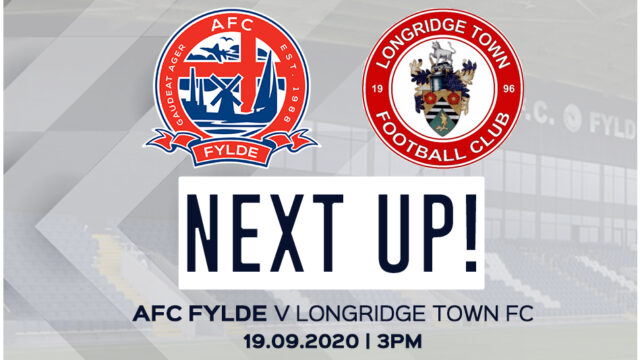 North West Counties League Premier Division side, Longridge Town are coming to face Jim Bentley’s AFC Fylde side in our next pre-season friendly, this weekend.

Unfortunately, due to COVID-19 restrictions the match will be played behind-closed-doors, with no fans allowed to to attend the 3pm kick-off.

The Ridge, as our upcoming visitors are known, were crowned Division One North champions in 2018/19 under the guidance of manager, Lee Ashcroft who has held the position since 2014. Ashcroft has a strong background in the game, having amassed over 400 career appearances. Most notably, they with Preston North End, West Bromwich Albion and Grimsby Town, as well as being recognised to play for England U21s.

The Ridge will face the Coasters off the back of a 1-1 draw with AFC Liverpool, a side that operate at the North West Counties League Division One North, level. That game was played at the Mike Riding Ground, home of Longridge. This 90 minutes will further the club’s preparations for the new season and allow them to have a final preparation match before playing Charnock FC next Wednesday evening in the Emirates FA Cup.

Jim Bentley’s side come into the game off the back of a 4-3 thriller with local side, Squires Gate. Despite defeat, there were positives for the Coasters’ manager as he was able to field a number of players and take a closer look at trialists.

You can refresh your memory on our pre-season matches so far, by taking a look at the match reports from each game. Just click the link below on which game you would like to catch up on!

Coverage of the match will be on our social media throughout, with a full detailed match report online after the game.