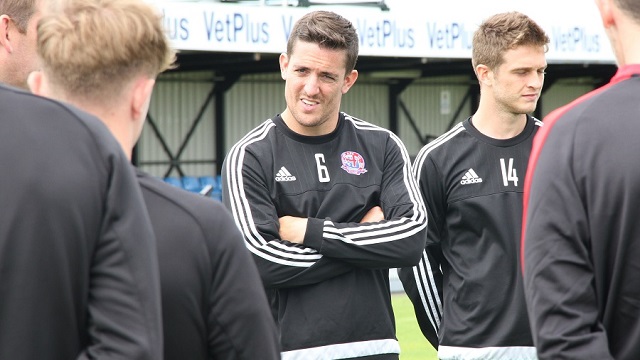 There is only one aim this season for new AFC Fylde signing Andy Bond – promotion. And automatic promotion at that.

The midfielder, one of three new signings so far this summer, joined the club from League Two Crawley Town having spent time at rivals Chorley last season.

After just a few weeks at the club the 30-year old admits he is already starting to feel at home with the Coasters.

“I’ve settled in very well to be honest,” said the former Colchester United man. “Everyone has welcomed the new lads in and made us feel at home here.

“Pre-season training has been good. You always know what pre-season brings. For the first two weeks, you’re running to get the summer out your system really. To be fair, the gaffer has been great. We’ve had the balls out and have been playing too which has been good. We have friendlies come up now and that will be the real test of where we are up to.

“If you’re new to pre-season, you don’t really know what to expect. Obviously, I’ve been there, done it for many a pre-season now. The more you put into at this early stage, the more you get out of it. If you’re saving yourself and not putting it all in, it’s pointless really.”

One of the factors that influenced Bond’s decision to join the Coasters was the ambition of the club to fire themselves into the Football League.

Promotion is the ultimate aim for AFC Fylde this season and Bond is firmly on board with the club’s philosophy.

“The aim this year is to win the league, it’s as simple as that. We’ve got to be the fittest team out and the best footballing team out there to win it and this is where it all starts.

“When I signed I came and spoke to the gaffer and I saw the new stadium. I knew what the plan was when I played against Fylde last year for Chorley. I knew the ambition of the club and the plan to get into the Football League by 2022.

“It’s a club going in the right direction and I want to be part of that.”

Bond has plenty of experience to call on in Fylde’s mission to gain promotion, including achieving the feat with Barrow in 2007-08 season and now he hopes his experience can be put to good use.

“I’d like to think my experience can help a lot. Hopefully I can help the younger lads if they want to come and talk to me about things or how to do things.

“That’s what experienced pros are there to do in my opinion. I’ve been very impressed with the lads already here and the lads that have come in. They’re a good bunch of lads and there is a lot a quality there too which we will need to get out of this league.”