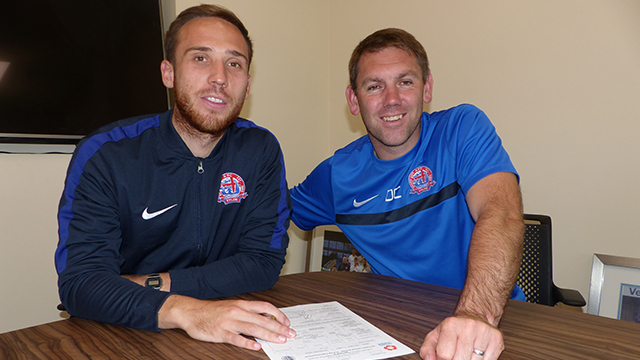 AFC Fylde new man Tom McCready can’t wait to get started after sealing a move to the club.

The 26-year-old has sign a one-year deal with the Coasters after leaving League Two side Exeter City.

McCready impressed throughout pre-season and was delighted to get a deal over the line: “It has taken a while and I was disappointed to miss the start of the season but now I’m raring to go and I can’t wait to get involved.

“I have been training with the squad for a few weeks so I already know the lads and that should make it a seamless transition. I just want to get playing now and help out on the pitch.

“I like to get on the ball and move the ball forward. I’m quite a box-to-box midfielder and hopefully the fans will like the way I play.”

McCready has also spent time in Wales and the United States during his career and is now relishing the challenge of the National League.

“I have been in League Two for the last four years but I did play in the National League some time ago for Altrincham when I was a kid at 18.

“It was probably a different league back then to what it is now but I have watching this season and the standard looks very good.

“It is competitive and I’m sure it will be a good challenge.

“The manager didn’t need to sell the club to me, I already knew all about Fylde and where the club was going.

“I have known the gaffer for a long time. We did pre-season together at Colwyn Bay a while ago so we know each other well and it seems like a good fit. Hopefully it will be a beneficial move for both parties.”