It’s a return to league form for the Coasters, who enjoyed an FA Trophy outing last Saturday against Stratford Town, winning 5-1.

Ebbsfleet United may be sitting in 10th, but they visit today as the form side in the league.

As always, it’s better the enemy you know: so read our match preview.

Today’s match programme features an interview with Coasters full-back Luke Burke, who is now in his second season with Fylde. 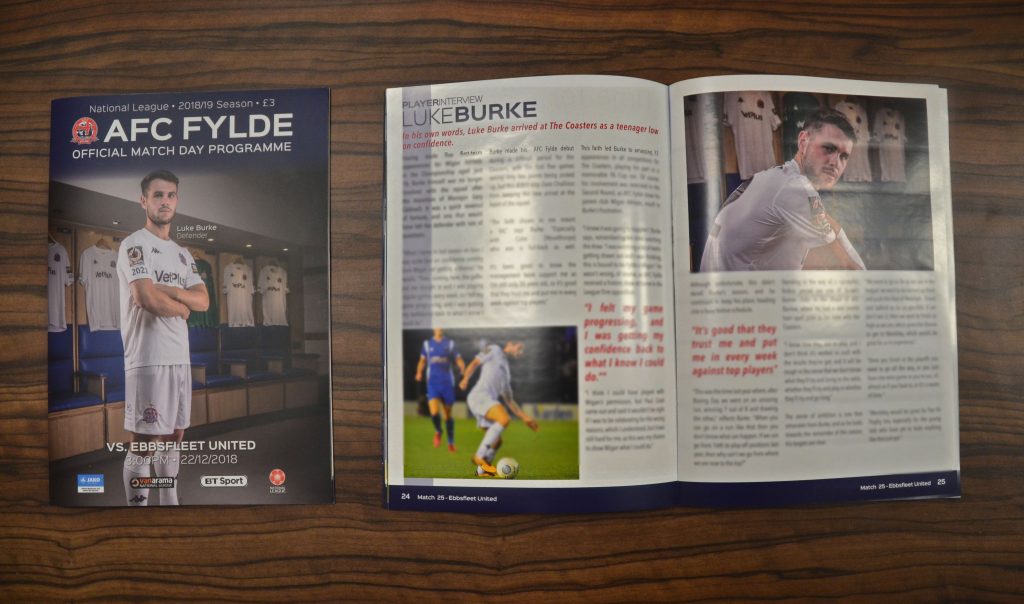 We talk to Burke about his time here so far, how he feels he’s progressing as a first-team player, and *that* FA Cup draw – which saw him draw his parent side Wigan Athletic.

The programme is available from around the ground today for just £3, and has a whole host of our regular features.

Arsenal will be taking on Burnley at 12.30pm, which you can catch in Bradleys from 12.30pm.

There’s football to be watched after our game too, as all eyes are on Ole Gunnar Solskjaer as he takes Manchester United to his former club Cardiff City.

Can the post-Mourinho era restore glory to United? Catch it from 5.30pm.

If you’re looking for somewhere else to grab your pre-match drinks, Springfields, based at the Fylde Sports and Education Centre will be open from 9am, stocked with everything you could need.

Then from 10pm it’s fight night, as Chisora and Whyte go toe-to-toe in London, whilst Frampton and Warrington’s bout also takes place in Manchester.

We’ll be showing both fights, so get yourself down and make sure you don’t miss a second of the action.

Tickets can be bought from the club shop, and must be purchased before heading to the turnstiles.

We also have lots of Coasters merch to get just-in-time for Christmas, perfect for the fanatics in the family.

Coasters fans can follow the action on the radio, with a scheduled broadcast from  Fylde Coast Radio, as well as our usual coverage on Twitter.

Coasters fans with BT Sport can also catch live updates from Mill Farm today, as the broadcast team are based here throughout the day!