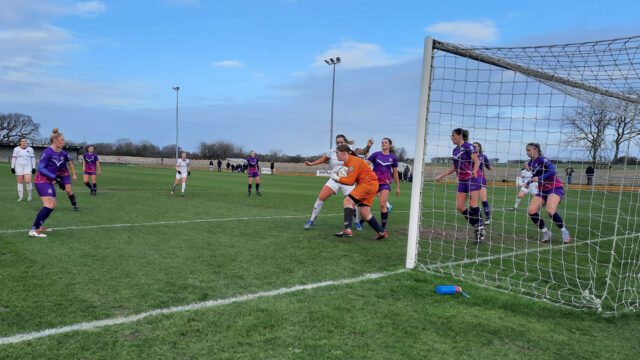 Fylde’s victory consolidated second-placed position in the league and closed the gap on leaders Derby County.

The match was settled by goals either side of the break from Faye McCoy, who scored from the penalty spot on both occasions.

Going into the fixture, the Coasters had capped a successful 2021 by defeating Norton and Stockton Ancients Ladies 3-2 to advance to the quarter-final of the FAWNL Cup. As for the visitors, Loughborough Lightning had previously bowed out of the same competition with a 3-1 reverse at home to Huddersfield Town.

Prior to kick-off, both teams held a minute’s applause to pay their respects to former Loughborough Foxes player and coach Molly Webb, who sadly passed away three years ago.

The match started with a high tempo, and it was the hosts who created the first chance early on. After Jodie Redgrave had won a free-kick on the right, Laura Merrin curled in a dangerous cross to the back post that Loughborough keeper Kiya Webb had to palm away to safety.

At the other end, Loughborough almost opened the scoring minutes later when Ella Powell turned expertly on the edge of the box and fizzed a shot against the outside of the post. The Fylde backline had to be on their guard against a well-organised Lightning attack.

After almost falling behind, the Coasters were then given the chance to take the lead from the penalty spot when Redgrave weaved past two defenders and was tripped just inside the area. The talismanic Faye McCoy stepped up to slot the penalty into the bottom left corner in the 12th minute, much to the delight of her teammates.

The Coasters were forced into an early change moments later when Merrin had to leave the field with a minor knock and was replaced by Sasha Rowe.

Fylde looked to double their advantage when Emily Hollinshead sent in a corner kick that fell invitingly to McCoy on the edge of the area, but McCoy could not keep her volley down.

Loughborough’s Nat Taylor came agonisingly close on the 26th minute when she cannoned a long-range effort against the crossbar. The ball rattled the bar and bounced over for a goal kick, much to the relief of Ellie Etheridge in the Fylde goal.

Etheridge was called into action moments later when she bravely dived at the feet of Rosetta Taylor to deny the Lightning forward a clear sight of goal.

As the first half drew to a close, it was the visiting keeper Webb who had to be alert to the danger when Fylde’s Beth Donoghue arrowed a direct free-kick towards the near post. Under pressure from McCoy, Webb did well to gather the powerful strike.

The Coasters started the second period on the front foot, and it did not take them long to double their advantage.

Hollinshead crossed from the left to play in Jodie Mortimer, who showed quick feet to turn inside the box, only to be tripped before taking aim at goal. The referee showed no hesitation in pointing to the spot, and McCoy slammed the resulting penalty into the roof of the net to extend the Coasters’ lead in the 52nd minute.

It was no less than they deserved, but the visitors responded with two quick-fire attempts on goal. Fylde keeper Etheridge had to pull off impressive saves on both occasions, first to deny Laura Steele’s shot from range, then to keep out Nat Taylor’s first-time effort at the near post.

As the second half wore on, both teams struggled to sustain their attacking momentum, and the game became scrappy in the middle of the park. The Coasters made a number of substitutions with 20 minutes remaining. While Olivia Fuller gave the Coasters some added stability in defence, Jess Holbrook and Amy Hughes injected pace and creativity into the attack.

After some neat combination play by Hughes, Fryer and Holbrook, the Coasters almost capped an exquisite team move with a goal when Mortimer curled a right-footed shot just over the crossbar.

In the 86th minute, Mortimer then turned provider when she played a through ball to Hughes, who took a touch inside and shot with the outside of her right boot, but Webb got down low to block her effort.

It turned out to be the last meaningful action of the match as Fylde sealed all three points to maintain their unbeaten home record in the league this season.

Next up, the Coasters are back on home turf on Sunday 16th January when they welcome Middlesbrough Women FC to Kellamergh Park. This next fixture in the FAWNL Northern Premier Division kicks off at 2.00 pm.