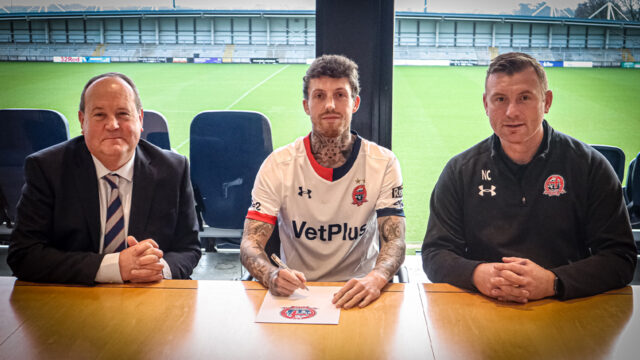 AFC Fylde are delighted to announce the signing of midfielder Danny Whitehead from League Two side Port Vale on a permanent deal until the end of the 2022/2023 season, with a further one-year option open to the Club.

Danny began his career at Stockport County, breaking through into the first team in the 2011/12 season and went on to catch the eye at Edgeley Park, earning him a move to West Ham United in 2013.

After making only one FA Cup appearance for the Hammers, Whitehead had a brief spell at Accrington Stanley before making a move in 2015/16 to Macclesfield Town in the National League.

Some great performances for the Silkmen led to Wigan coming in for the Trafford born man, although he returned to Macclesfield on loan for most of the 2016/17 season. At the beginning of the 2017/18 season, the deal was made permanent, and he was a key figure in their promotion back to the Football League that season.

His performances earned him a move to Salford at the start of the 2018/19 season where he helped them achieve promotion to the Football League, ironically beating Fylde in the playoff final at Wembley.

In 2019, he was loaned back to Macclesfield before joining his old Manager, John Askey, at Port Vale in 2020. Since Askey departed, he has fallen out of favour, and we are delighted he is now able to join us.

On Danny signing for the Coasters, Manager Jim Bentley said: “Danny has had a good career and played in some successful sides. He’s a good all-round midfielder, he’s hungry to do well, and he is still at a good age to get even better.

“It’s a really good signing for the Club, and we are looking forward to working with him.”