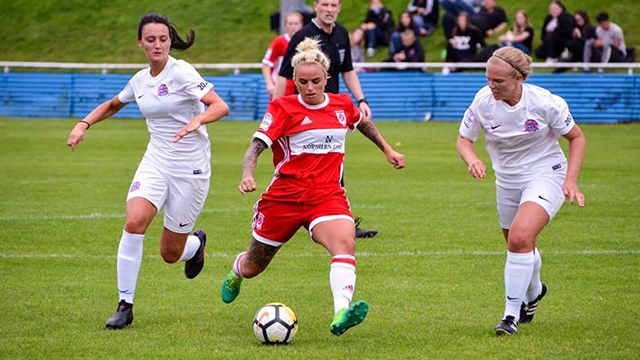 Ladies kick off with big win!

Fylde Ladies kicked off their the new Women’s Premier League season with a comprehensive 3-0 victory away at Middlesbrough.

Three second-half strikes secured a perfect start to the campaign for Conrad Prendergast’s side as they aim for promotion to the Women’s Super League II.

Hannah Forster broke the deadlock shortly after the interval before debutant Veatriki Sarri doubled the advantage from the spot. Fellow summer signing Lauren Davies wrapped up the points with a third Coasters goal in just ten minutes.

The Coasters were greeted by glorious weather on Teeside for the opening fixture and the start to the match was equally bright as both teams raced out of the blocks.

It was Fylde began to take control midway through the half with some delightful play in the final third but the opening goal was proving elusive.

A tactical change saw Danielle Young move from a wide position into the centre as the Coasters limited Middlesbrough and prolific goalscorer Bianca Owens to very little in front of goal.

The second half continued in a similar vein with the visitors firmly in control – Sophie Charlton going close following a fantastic ball from Danielle Lea in behind the Middlesbrough back three.

Just two minutes later and the lead was two when Charlton played in Greek international Sarri who was brought down in the box. The forward dusted herself off to convert the penalty with a low strike into the bottom corner.

Middlesbrough struggle to find a response with the Coasters putting in a superb defensive performance and the result was put to bed in the 66th minute when Davies netted to seal the three points.

Fylde Ladies Assistant Manager Robert Curran was delighted with the performance: “The players were fantastic. As a team we stuck to the game plan we had worked on in training and they took in everything that we had spoken about before the game. Most importantly though we showed a real togetherness which was a big part of this important win.”

The Ladies are next in action on Sunday 3rd  September when they travel to Bradford City for the first cup tie of the season.