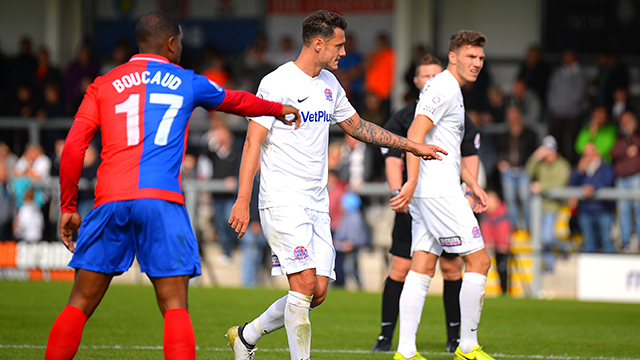 Clean sheets over goals for Grand

AFC Fylde defender Simon Grand endured a mixed afternoon on his full debut during the 2-2 draw with Dagenham and Redbridge at the weekend.

Making his first start for the club in the absence of captain Josh Langley, who has been ruled out for the season with a serious knee injury, Grand made the perfect introduction with what looked to be the winning goal four minutes from time at Mill Farm.

However, Daggers midfielder Sam Ling stole in to grab the equaliser deep into stoppage time to extend the Coasters’ wait for a first National League win of the season and Grand insists his side need to tighten up.

Grand said: “It wasn’t just the result that was disappointing on Saturday, it was the way that the goals came about. To concede late in both halves has made it feel like a defeat rather than a draw.

“As a defender, the way I look at it, clean sheets win you games and that’s something we haven’t managed to do yet this season. We need to work on that. We need to shut up shop a lot better and stop leaking goals because teams aren’t having to work very hard to score against us at the moment.”

The 33-year old, signed from Salford City in the summer, was pleased to lend a helping hand at the top end of the pitch against Dagenham but is now more interested in shoring up the backline.

Grand was a regular on the scoresheet at Moor Lane, finding the net on nine occasions last season.

Grand added: “We put good quality balls into the box from set-pieces and it’s my job to go in there and get on the end of it. If that’s something I can add and help out with then great.

“However, I’d much rather take a clean sheet at the back and leave the boys up front to do their job and get the goals. Primarily I want us to start picking up some clean sheets and go from there.

The Coasters travel to Hartlepool United this weekend and despite their disappointing start to the new campaign, Grand is not expecting an easy ride.

“We don’t look at it as an easier game because they have had a slow start. At the beginning of the season we would have never viewed Hartlepool away as an ‘easy’ game. It will be as tough as ever and we need to stop being so naive in defence.

“We need to toughen up and become a lot more difficult to score against.”