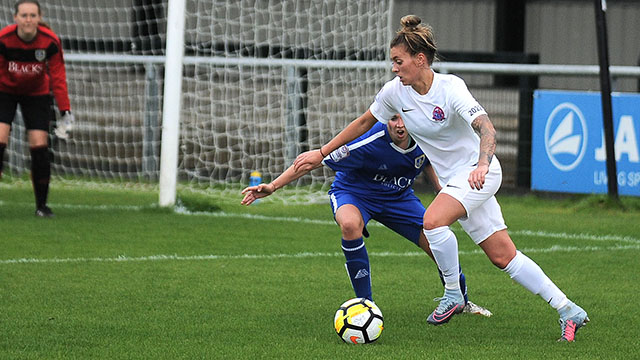 Fylde Ladies recorded a landslide victory as they hit Bury Ladies for TEN in the Lancashire County Cup.

The Ladies fell at the final hurdle of the competition last season against Blackburn Rovers but made a serious statement of intent with an emphatic win.

Manager Conrad Prendergast made a number of changes to the side that saw off Guiseley Vixens in the Women’s Premier League the previous weekend.

Northern Ireland international Kimberley Turner, Eve Kennerley and Demi Devraux all enjoyed their first starts of the season, whilst full-back Wilkes was pushed forward into a more advanced role.

And it was the youngster that opened the scoring after just five minutes when she was picked out racing clean through and slotted the ball home.

The hosts didn’t take their foot off the gas and doubled their lead just two minutes later when Foster struck. Makin made it three soon after with her first of the afternoon and had her second shortly before half-time when she converted from Farrell’s cross.

Bury fashioned a rare chance after the interval, forcing Fylde stopper Alex Brookes into a save but could not capitalise on their brief pressure.

Lea’s long-range strike made it five for the Coasters before Makin completed her hat-trick following some good build-up play from Wilkes.

The forward drove in from the right to add her fourth and Fylde’s seventh before completing her goal rush for the afternoon, stabbing home in a goalmouth scramble.

Makin then turned provider, unselfishly squaring for substitute Charlton after the hapless Bury keeper had spilled her initial strike.

Fylde made it double figures with less than five minutes to play when Farrell blasted a free-kick into the top left-hand corner.

Following her five-star display, Makin was full of praise for her teammates: “I am very pleased to come away with five goals. I want to continue this form now and take it into our next game in the league.

“Overall the girls were great. We knew what we had to go out there and do. We played to our strengths and everyone put in really good individual performances.”

The ladies side will be keen to continue their form when they host Derby County in the Women’s Premier League this weekend (Sunday 24th September, 2pm, Kellamergh Park).