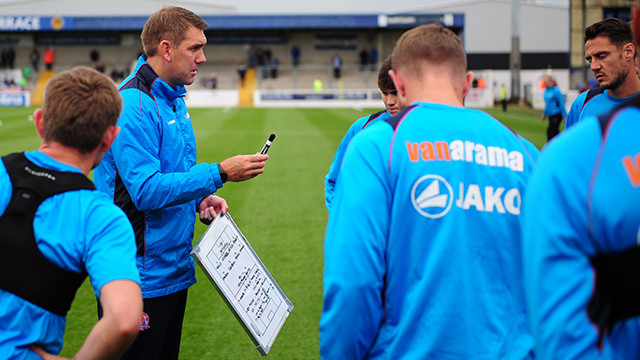 AFC Fylde boss Dave Challinor admits his side looked nervy during Saturday’s 2-2 draw at Eastleigh.
A first-half strike from Henry Jones and a first of the season from Jordan Tunnicliffe helped the Coasters twice come from behind on the South Coast at the weekend.
The result leaves Fylde just one place outside the relegation zone, albeit with a four point cushion, and Challinor believes late disappointment has been taking its toll on his side.
The Coasters dropped five points in stoppage-time from their opening ten National League matches, most recently in the last minute in a 2-1 defeat against Macclesfield Town, and Challinor admits the final stages in games are leaving him ‘on edge’.
Challinor said: “If we had picked up the points that we have deserved to this season then there would have been a completely different feeling about the result on Saturday.
“Towards the end I suppose the nerves begin to kick in because of what has happened on occasions this season. The game was really stretched and I wouldn’t have been surprised if either side had won it.
“The last fifteen minutes of our games this season have become very open which, as a manager, leaves you on the edge a bit.
“We are creating plenty of chances but we are letting that happen at the other end too. It would have been a real kick in the teeth if we had got nothing from the game considering the effort that we put in.
“To be fair to the lads, we responded really well after conceding both goals.”
Whilst Challinor admits that any point on the road is a positive, he believes that his side must start backing it up at home.
The Coasters have won just one of their five league outings at Mill Farm this term, but Challinor is hoping to turn that into two against Woking this weekend.
“I’m far happier than I was after Tuesday night at Macclesfield because we have managed to come away with something from a very long trip. We would have loved to win but we now have a week to work on things and make sure we are better next time out.
“These points away from home look an awful lot better if you can start picking up three points at home. We haven’t managed to do that enough this season.
“We have another tough game on Saturday but if we can cut out the silly mistakes then hopefully we will see big difference in our results.”