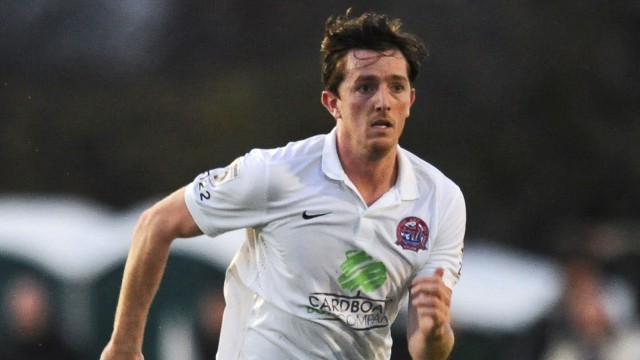 Josh Wilson put pen to paper on a one and a half year deal last month after playing just seven games on loan for The Coasters since he first joined in early November.

The former Northwich Victoria and Vauxhall Motors attacking midfielder joined Fylde from Conference Premier side FC Halifax Town after spending a month on loan at Guiseley earlier this season.

Wilson spoke to Media Officer Chris Park earlier in the week and admitted the club has made a great impression on him since his arrival which was one of the reasons why he signed the deal.  Another factor was the manager himself: “I’ve always been interested in AFC Fylde and have had a good relationship with Dave Challinor ever since he was at Colwyn Bay as we lived in the same area so often spoke to him” the 26-year-old said.  “I’d heard good things about his methods and training systems and have been really impressed with what I’ve seen so far.”

After an incredible campaign with the Halifax last season he added that it was frustrating to have to leave The Shay.  “I got an injury in pre-season which meant I missed Halifax’s first game and struggled to get back into the side.  I got on really well with the gaffer and I spoke to him about going out on loan to get my fitness back and initially went for a month to Guiseley as I was working in Leeds.”

Guiseley was the better option for Wilson at the start of the season but confirmed he had also spoken to Challinor about coming to Fylde: “Because of where I was based Guiseley was the best option for me but after moving back to Liverpool I spoke to Chally again and he brought me up to Fylde for a loan spell.”

Joining The Coasters has also helped him rekindle an old friendship from earlier in his career at Vauxhall Motors.  “I really enjoyed my time there and became good mates with centre back Tom Hannigan” he added.

Wilson has gained vast experience in the Conference North and Premier already when he was part of the Guiseley side that just missed out on promotion from the Conference North losing to his then future club Halifax in the 2012/13 season Play-offs.  He then joined the Shaymen last season helping them to a fifth place finish and defeat in the Play-off Semi Finals to eventual winners Cambridge United in their first season back in the top tier of non-league football.

That experience will hold him in good stead as The Coasters enter a busy month of league and cup fixtures starting this weekend in the FA Trophy Second Round against AFC Telford United.  This game will pit Fylde against a side in the league above but Wilson believes his new team mates would fit right into the Conference Premier if promotion was achieved this season.

He said “personally I’ve had a similar experience last season with Halifax as no one fancied us to do so well as a part-time team but we proved them wrong and if we can keep the squad together and go up this season I don’t see why Fylde couldn’t make the same impression on the Conference.”

“From the first training session I took part in I could see there was a lot of quality in the side and I personally think this is the best squad in the division.  I’ve noticed that there’s a great balance of youth and experience in the squad as well.”

In terms of the club’s overall ambition he added “I think this team can go as far as they can up the leagues.  I played against Fleetwood Town a few years ago when they were in the same position and they got there with a few years of hard work so I don’t see why this club can’t do it either.”

Like any footballer at this level Wilson still harbours ambitions of playing in the Football League and feels that this is highly achievable with The Coasters.  He has already shown why Challinor made him a permanent member of his squad after just seven appearances, scoring one goal, and has already made a fantastic impression on the fans.

Make sure you come along to cheer Josh and the rest of the Fylde squad against AFC Telford United on Saturday in the Second Round of the FA Trophy.