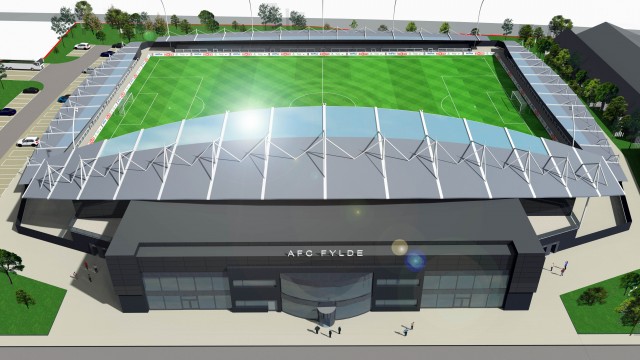 The day we have waited patiently for, and some thought would never happen, has finally arrived.

This afternoon Fylde Borough Council Planning Committee gave the final approval to the club’s new Mill Farm Complex. This last hurdle, a legal challenge of sorts from a local helicopter owner was dismissed by the committee who followed their officers recommendation for approval.

Commenting on the result Fylde Chairman David Haythornthwaite who attended the meeting said
“It’s been a long road but we are finally there. It’s down to business now and we have a meeting with our preferred builder tomorrow morning to sign off the last few details. Work is then expected to begin in earnest the middle of February with an expected opening date of January 2016.

“I’m so pleased for the fans but particularly for our management team of Dave Challinor and Colin Woodthorpe who three years ago dropped down two leagues to join us on this incredible journey. They bought into our ambition and believed what we told them, so it’s great to be able to deliver this for them, as they have delivered on the football side for us.

“I want to publicly thank all concerned in making this happen, councillors, our planning and legal teams, and finally my best mate Dai for asking me to come to this great club in the first place. Now at last we can go to work.”

David will be on Radio Lancashire’s Non-League Hour tonight 6-7pm, along with Dave Challinor.