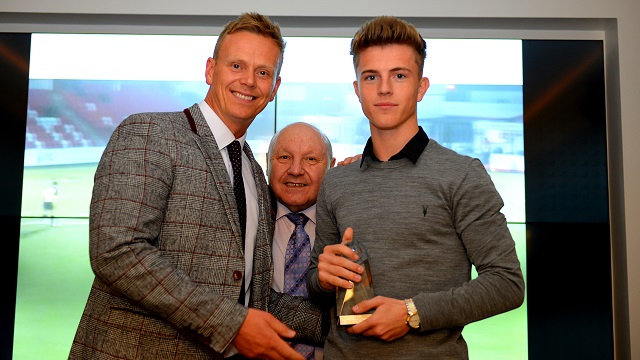 AFC Fylde starlet James Hardy admits he has been delighted with his partnership with top scorer Danny Rowe over the last year.

The 21-year-old has been a revelation since joining from Manchester City 18 months ago and was last week named as the club’s Kepak Young Player of the Season for 2016/17.

Hardy helped himself to 12 assists last term whilst also chipping in with eight goals, despite missing the season run-in through injury.

Now, Hardy is relishing the prospect of plying his trade in the National League with the Coasters.

Hardy said: “I’m very pleased to win this award. It feels good to be recognised for having a good season. Personally, I was disappointed to get injured towards the end of the campaign but it’s good to get the recognition for what I did before my injury and to play a part in us winning the league.

“Boston United at home was the highlight of my season. We won 9-2 and I got four assists and a goal. I felt I had a really good game and as a team everything clicked. We absolutely battered them and I was really pleased with some of the assists that I got that day.

“I have had a good relationship with Rowey this season. When I was on the pitch, I’d always look out for him because I knew that if I gave him a chance, nine times out of ten he’d stick it away.

“Rowey is a great person to play with and for him to say that he’d have scored even more goals if I hadn’t got injured, it means a lot.

“It was quite funny how my move to Fylde came about, but it’s worked out really well. It’s got me out into the men’s game, away from the U23s, which is what I thought I needed. Playing for England C was really good too and I was pleased to get more recognition.

“I’m just concentrating on keeping fit and seeing what happens now. We’ve got a new challenge, playing at a higher level so I can personally test myself against better opposition. I’m really looking forward to it to be honest.

“Everything is a lot better about being in the National League. You get more coverage on TV, the stadiums are better, which will hopefully mean the pitches are a lot better too, which I think will help my game. There’s been a few games on pitches this season that probably aren’t best suited to a player like me but I’m really looking forward to the step up and there are some really big clubs in there. I can’t wait.”