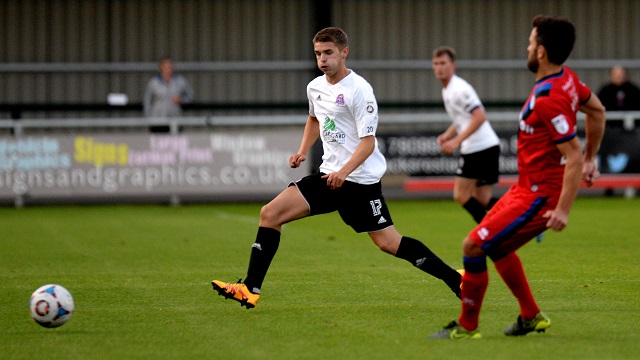 Gilchrist deal could be on – Chally

Trialist Jason Gilchrist has given himself a real chance of earning a contract with AFC Fylde says manager Dave Challinor.

The 21-year old striker netted the Coasters’ first goal of pre-season in the 2-1 defeat to Rochdale on Tuesday night and has impressed with cameo appearances in both warm-up matches so far.

Gilchrist spent 10 years coming through the ranks with Manchester City before joining Burnley, where he was top scorer two years running in their youth team.

The frontman signed professional terms with the Clarets in the summer of 2013 and spent time out on loan with Droylsden, Accrington Stanley and Chester, however he was recently released by the Premier League new boys.

Coasters fans will be hoping Burnley’s loss with be their gain and Challinor is keen to have another look at the youngster tomorrow away at Nantwich Town.

Challinor said: “Jase is a goalscorer. He has looked really sharp in training and he is a very good finisher. He took is goal really well the other night and had another really good chance where the keeper has had to make great save.

“He is bright player and now we just need to look at him in terms of how he fits in with the way we play.

“We have twice played him in a front two and we will probably have a look at him tomorrow in a front three and see how that goes.

“He has certainly done himself no harm with his performances so far. Scoring goals is massively important in any football match so he’s given himself a real chance.”

At the other end of the pitch, centre-halves Steve Williams and Josh Langley lined up together for the first time during the week and Challinor admits they may take a little time to used to each other.

“It was a tough test for them because Rochdale pressed us really well and there’s not a great deal that they could do about either of the goals, but it’s a fledgling partnership.

“Both of them would like to play on the right hand side of the two but I’d say Josh is probably slightly better equipped to play there in terms of how we play.

“Steve will take a little bit of time to get used to our system. He’s having to adapt his game because he’s playing on the left and that may be affecting him vocally when he’s organising, but he will get used to it.

“Once they get used to each other I’m sure that as a partnership they will do well.

“We still want to add to the squad but we need to get that back four or five nailed down as soon as possible.”

One position Challinor is particularly eager to address is the goalkeeper, following the departures of Ben Hinchliffe and Matt Urwin this summer. Three trialists have been on show in the opening two games but the manager is keen to try a couple more before he makes a decision.

“We have spoken to five or six clubs about loans, but we have to make sure we pick the right one.

“We have had a couple more goalkeepers come in this week that potentially we will have a look at tomorrow.

“The lads that have featured so far have done themselves no harm. Tony (Thompson) has played a couple of games and Paul (White), who featured for 45 minutes against Rochdale, could play some part tomorrow along with another.

“That is one area we really need to get sorted but we also want to add some competition in the full-back positions so there could be four or five players yet to come in.”