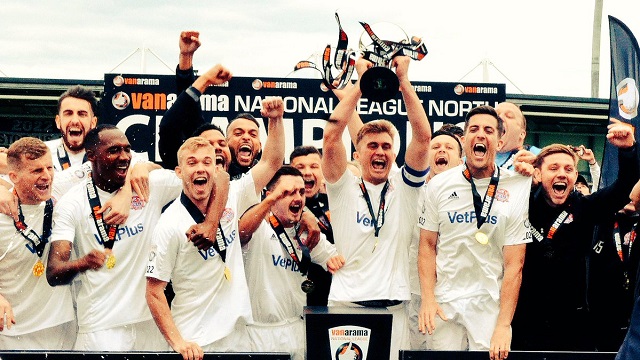 AFC Fylde boss Dave Challinor admitted it felt ‘amazing’ to get his hands on the National League North trophy.

The Coasters clinched the title last weekend at Boston United but celebrated in style yesterday at Mill Farm with a final day victory over Worcester City.

Challinor said: “It feels amazing to be holding the trophy. There’s been a lot of hard work that’s gone into it and this was a fitting way to finish what’s been a fantastic season. We’ve worked our socks off this season and this was was an occasion when everyone could celebrate. Last week was tough but I was really looking forward to the game and it was a chance to say thank you.

“This season has seen a lot more highs than lows. You always try in football not to get too high when you win and not too low when you lose. That can be difficult if you get caught up in the emotions of things. Winning it last week was fantastic. Getting a point against Kidderminster here was massive as well and going to Halifax and winning was key. They were defining moments and it’s great to get across the line.

“Occasions like this are few and far between. I was adamant that regardless of what happened I wanted to enjoy it. I wanted to win the game which we’ve done and we can celebrate properly.

“We didn’t have a great start to the game but it was a test of mentality more than anything else. We wanted to score as many goals as possible. All the players deserve it. They’ve been fantastic.

“We had a long night and I’ll make no apologies for the state I’ll be in afterwards!”