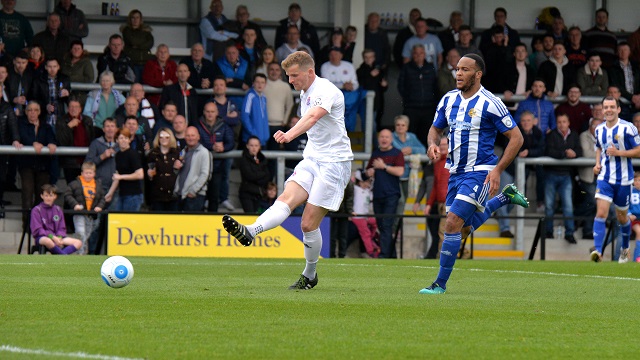 Goal machine Danny Rowe admits he was confident that AFC Fylde would win the National League North title right from the off.

The Coasters led the pack since the start of September and clinched the league crown on the penultimate day away at Boston United to put to bed the disappointment of two successive play-off heartbreaks.

Rowe has played a huge part in Fylde’s success this season, bagging 50 goals in all competitions on his way to being named the Vanarama National League North Player of the Year.

Speaking after the game, Rowe said: “I’m buzzing! I wanted four goals really to get to fifty league goals for the season but it wasn’t to be. I’m very happy with how myself and the team has performed, not just today but over the course of the whole season. We’d already won the league beforehand so the day has been very enjoyable.

“Every year I set the aim of getting to thirty league goals. That’s what I set my target as again this season and obviously I’ve beaten it. I’d beaten it by January I think.

“I’ve felt confident that we’d win the title all the way through this season. It’s been a tough few months and I thought we should have won it before we actually did. Saturday was an immensely proud day and finally having those medals around our necks adds to it even more.”

The league’s record goalscorer now has his sights firmly set on next season in the top tier of Non-League football – the highest level Fylde have ever achieved in their meteoric rise up the football pyramid.

“I’m really looking forward to our challenge next season,” Rowe added “We’ve all improved a lot this season and we want to be in the Football League. Getting to the National League is another step. It’s a league up and we’ve got to test ourselves and try and go again.”