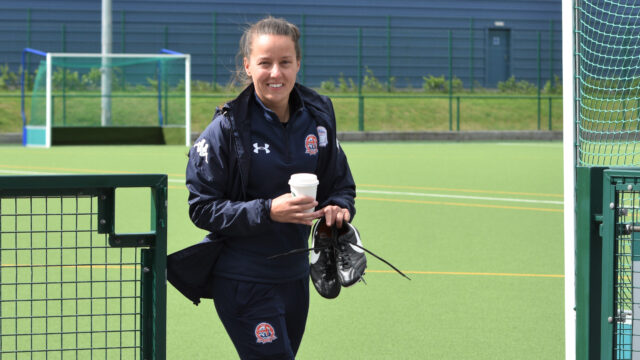 Danielle Young: “It’s great to see smiles back on faces.”

Fylde Women FC joint-manager, Danielle Young gives an update on what the women’s team have been up to recently.

The team decided to take advantage of the relaxation of rules to meet up and train in very small groups lately.

“It was great, it was nice to get back in and see each other,” Young told afcfylde.co.uk. “Obviously there are still strict rules that we have to be careful with and follow, but the girls have been really understanding of that. In truth, we just wanted to all see each other, it has been a long time and a lot has happened in that time so it was nice to get a football back out and it was great to see smiles back on faces.”

The training that has taken place has been low-key for now, as Young explained, but it has been important from a social aspect as well as a technical one.

Young continued: “Most of the team came to the session. We didn’t make it mandatory as everyone has different circumstances, so it was optional but it was great to see so many come and join in. I think one of the main elements of team sport that people don’t often see is how close the group is, we’re a bunch of mates that all get along so well, so it was great to be together again, from a distance!

“We’ve had a couple of new faces join on the coaching staff, so it has been important to begin the integration process for them. Alex Hilton-Slee has joined us as goalkeeper coach. He brings in a lot of experience on the coaching side and was at Chorley previously. Jenny Swarbrick has joined us from Manchester United Women, adding more knowledge and expertise to the group as she also has her UEFA A Licence, which is a massive achievement.

“Kim [Turner, Joint-Manager] has just completed her UEFA B Licence which is great news, and she wants to go on and do her A, so Jenny will also be a great help to her development as well.”

The girls have been quick to take to social media since the restart to training, with the Coasters’ trusty club photographer heading town to snap some images. A positive environment is key for the new management team, who will also be looking to add some new faces to the group soon on the playing side.

“That brings positive vibes, doesn’t it?!” Young explained. “It’s great to see the girls happy, we’re back kicking a ball about and seeing each other, the photos are out and of course we will be looking to put a group together this season that can compete in this league. We’re hoping to have some news soon on fresh faces and of course confirming our full squad for the upcoming season with girls who have remained at the club.”