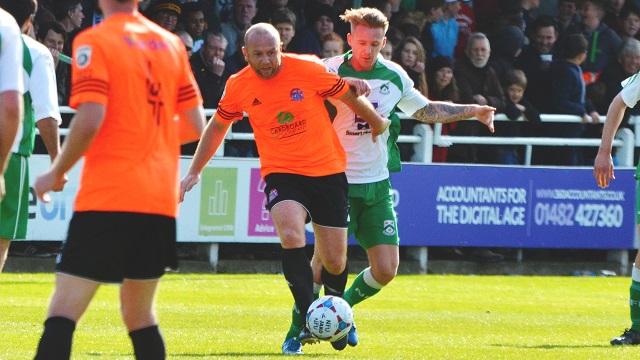 Crainey – We must bounce back

Fylde suffered a second successive play-off heartbreak when an extra time goal from Ferriby’s Danny Hone saw the Coasters miss out on promotion to the National League and whilst the former Scotland international could not hide his disappointment, he insisted his side must now look to the future.

“We are really disappointed,” said the former Blackpool ace, who won promotion to the Premier League with the Tangerines back in 2010-11. “I’m not sure it’s quite sunk in yet. Our main aim for the season was to get promoted and it’s not happened.

“I feel really dejected but sometimes you need this kind of feeling to move forward and hopefully that can happen next season.

“However we missed out would have been disappointing but to get so close and not finish the job hurts a lot.

“The dressing room was very quiet after the game and no one really knew what to say. I think it hit us all hard but I’d be disappointed if the lads weren’t dejected to be honest. It’s now about how we bounce back.

“It may be harsh but that opportunity has gone now and we have to look forward and try to stay as positive as we can.

“We have a good squad of players but obviously the manager will chop and change to try and improve the squad. It is a great club and we are certainly going in the right direction. I’ve really enjoyed being part of it and we will see what happens next season.”

Despite approaching his 35th birthday, Crainey insists he still has plenty left in the tank and is keen to extend his stay with the Coasters.

“I’ll be speaking to the manager soon I’m sure but I still feel fit so now it’s down to him because I’d love to stay. I have been playing catch up all year after missing pre-season, so if I can get one in this time around then I think that will really help.

“I definitely think I still have something to offer the squad, both on and off the field. I’ve felt fine in the games that I’ve played so far but with the added bonus of a pre-season, I think I’ll be more than ready for next term.

“I think the summer move to Mill Farm will give everybody a lift ahead of the new season. It’s a tough league and we need to try and get off to a good start and I’m sure that’s what the manager will look to do next season.

“The teams that are joining us for the new campaign will be aiming to stamp their authority on the league as well as the teams that just missed out on promotion this time.

“We want to get promoted, however that comes about. If that means going up automatically then great, but if it’s play-offs then so be it, we just want to get there. Hopefully we can have another good go at it next time around.”