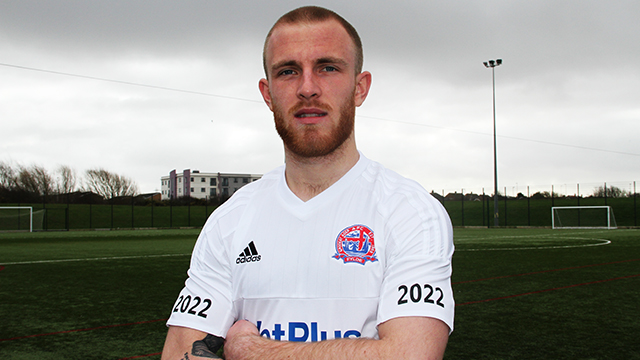 Coasters move ‘next step’ for Morgan

AFC Fylde new man David Morgan could not hide his delight after making the move from Nuneaton Town yesterday.

The 22-year-old midfielder put pen to paper on a one-and-a-half year deal, with the option of a further year, and believes his switch to Coasters is the next step in his career.

Morgan said: “I feel like this is a great move for me. I was enjoying my football at Nuneaton but this is the next step for me.

“The ambitions of the club were a huge factor for me. It is an incredibly progressive club and they are always looking forward and that’s what you have to do in football. So this is a good move in my career.”

Despite fierce competition in the Coasters midfield, Morgan insists he is not shying away from the battle for a first team starting spot.

“Competition for places is something that you will get at every club. It is something I relish because I don’t want to become too comfortable. You need that drive so that you fight to get in the team every week. Competition is healthy.

“I’m sure I will get to know the lads quickly, settle in and most importantly get into the team so I can show what I can do.

“I would class myself as a deep-lying midfielder that likes to get on the ball and play. Over the last few weeks I have played slightly further forward in a midfield two so I am happy to play in either role. I enjoying getting on the ball and trying to create chances.

“I have watched Fylde and played against them earlier in the season and I know the style of play here will suit me down to the ground.

“I have played every game this season so I’m fit and ready to go. I’m looking forward to starting training and hopefully I will be involved on Saturday.”

“The people I have met so far have been brilliant and I couldn’t have asked for any more.”

Fylde continue their title charge at Harrogate Town this weekend and Morgan is keen to get promotion wrapped up as soon as possible.

“Harrogate is a tough place to go. They have a 3G pitch so that’s something different to think about but we will be going all out for the three points.

“We want to get even further clear at the top. The aim is obviously to get promoted and we want to make sure of that as quickly as possible.

“From past experience I know that the pressure starts to build the longer it drags on so it’s important we get through the next seven or eight games and hopefully we will have it wrapped up by then.

“If we look at it as one game at a time then it settles people and we can concentrate on working towards our overall goal.”