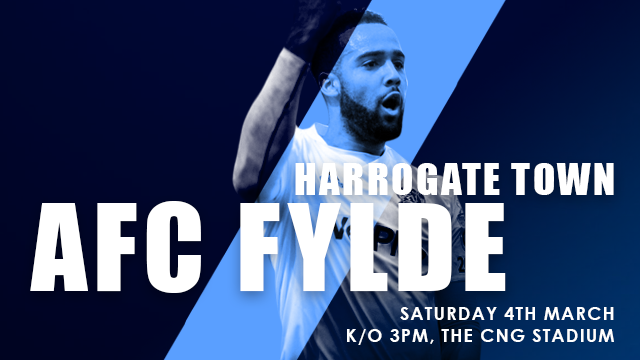 AFC Fylde will look to build on their ten point lead at the top of the National League North at Harrogate Town this weekend.

The Coasters have recorded back-to-back 3-1 victories in the last two games against Brackley Town (A) and Tamworth (H).

Defender Steve Williams has been in fine goalscoring form with a goal in each of the above to bring his tally to seven for the campaign.

Top scorer Danny Rowe has also enjoyed a purple patch over the past fortnight, netting twice at St. James Park before bagging his 41st goal of the season in the victory over Tamworth last time out here at Mill Farm.

Title-rivals Kidderminster Harriers missed their chance to close the gap at the top on Tuesday night when they suffered defeat at Brackley in the first of their two games in hand. They travel to FC United of Manchester this weekend before making the trip to Stalybridge Celtic on Tuesday evening.

Saturday’s hosts Harrogate head into the match in good form themselves, with 10 points from a possible 15 over the last five games.

Last weekend’s impressive 3-2 victory at Darlington has seen them close the gap on the play-off places to five points.

Centre-half Simon Ainge currently leads Harrogate’s goal charts with 13 strikes to his name having spent much of the season playing centre-forward.

The Coasters came out on top in a tight contest at Mill Farm earlier in the season. The visitors had taken the lead on the stroke of half-time as Tom Platt turned in a free-kick at the far post but the Coasters rallied in the second half and two goals in four minutes from Sam Finley and James Hardy secured the three points.

Team news:
New signing David Morgan will be hoping to make his first appearance in a white shirt, whilst defender Dom Collins could also be available after recovering from injury. Captain Josh Langley and midfielder James Hardy are both struggling with groin problems whilst midfielder Dan Bradley is touch and go for the weekend after picking up a knock last time out.