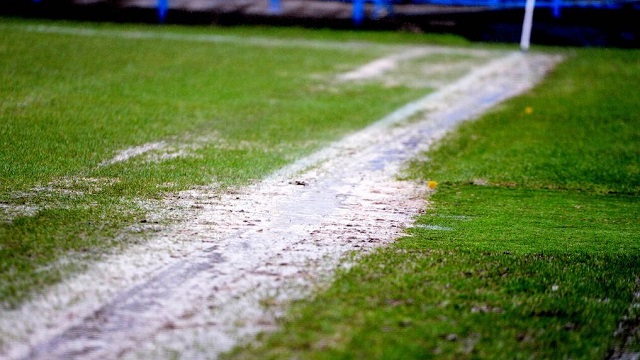 There had been just 12 minutes of play before the referee called an end to proceedings with the match goalless.

“It’s obviously frustrating but the right decision was made,” said Challinor. “It was still battering down with rain even after they called it off and it was probably dubious whether the match would start in the first place.

“When we arrived at the ground at 1pm and the pitch was fine but it rained constantly and was due to all day. The ref wanted to give it every chance he could but as soon as the ball began to stop and not roll properly he had to make a decision.

“You always have to be careful of the safety of the players. The ball was stopping in the water which resulting in tackles becoming 50/50s and that’s when it becomes dangerous.

“The ref has to be sensible and there was no way that the game could have finished and it would have only got worse.

“It makes it a very busy month for us now and we will have to see when we can fit it in. The one positive is that it’s not too far to come back again.

“It’s more frustrating because it gave us a chance to right any wrongs from last week against Lowestoft Town but I suppose now it gives us an added break and a full week to prepare for Alferton Town at the weekend.”