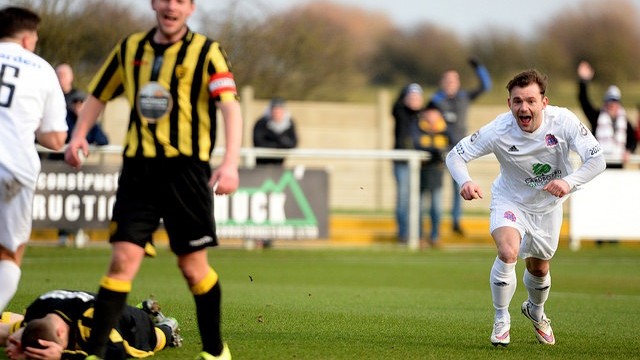 AFC Fylde manager Dave Challinor admits he was relieved to hold out for victory in a close match against Gloucester City at the weekend.

Danny Lloyd’s tenth-minute strike was the difference and Challinor believes results are more important than performances at this stage of the season.

“We were far from our best today but we managed to grind out a very important win,” said Challinor. “It made no difference how we played when you look at the league table, we desperately needed the three points.

“Credit to Gloucester who stopped us from playing for large parts of the match but we need to be better than we were in the future.

“We rode our luck at times and Matt (Urwin) had to make a few good saves, but we can put this one to bed now and look forward to Lowestoft Town.

“Matt’s done well since coming into the team and has thoroughly deserved his chance. We have two very good goalkeepers and there is huge competition between them, but there will be no one more delighted for Matt than Ben (Hinchliffe).

“Ben has lost his place in the side but his training leading up to the weekend was potentially the best he’s been in his four years here so he’s working hard to win his place back.

“We have a long journey tomorrow night to Lowestoft which isn’t ideal, but we have to go there and win. Normally I would say we need to produce a performance but at this stage of the season it’s all about winning. We need to keep the pressure on the teams above and around us.”