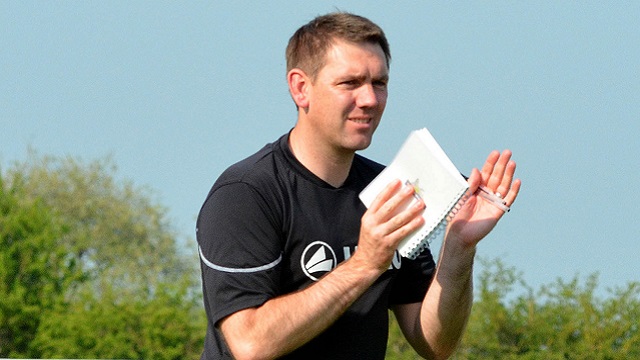 Chally keen to ‘freshen up’ squad

AFC Fylde boss Dave Challinor was keen to explain the reasoning behind several of his first team stars leaving the club this summer.

Five players have left for pastures new since the club’s transition to full-time football, with four already signed up to new clubs.

Captain Tom Hannigan and midfielder Brad Barnes have moved to Altrincham and Salford City respectively, whilst both winger Danny Lloyd and goalkeeper Ben Hinchliffe have switched to Stockport County. Left back Adam Sumner has also chosen to move on as Challinor looks to freshen up his squad.

The manager explained that casualties were inevitable this summer:  “We needed fresh impetus as we are heading into a new stadium and a new era for the club. We want people here to be the best they can be and going full-time highlights that.

“Our recruitment model has had to change because of that but we still have to try and be as efficient as possible. We can’t afford to supplement a players wage from their job away from football just to keep hold of them. It isn’t sustainable and not the way we are looking to do things.

“Adam Sumner was given the option to come back in for pre-season and earn himself a deal. He had missed games through the season with an injured shoulder and he would be the first to admit that he hasn’t done the appropriate rehab to fix that problem. We can’t really afford to go into a long season with contracted players that could potentially be out for extended periods throughout the year.

“He has chosen to move on but the door is always open if he wants to come back and prove himself. In my experience, if someone had given me the chance to do that then I would have wanted to prove them wrong but that’s completely up to him. We are still looking at options in both full back areas but nothing has happened as of yet.”

Stephen Crainey finished the season in the left-back position and Challinor admits that the former Blackpool ace is still in his plans.

“We are looking a little further down the line with Crains in terms of a coaching role with the first team and potentially the academy set-up. He still wants to take part in pre-season and push himself forward as a player so we will wait and see with that one. He is a very experienced player and one we very much want to keep around one way or another.”

Challinor admits that ideally he would have kept certain players but they were a victim of circumstance due to the switch to full-time.

“We knew right from the off when we signed Ben Hinchliffe four years ago that it would be difficult to take him full-time. He has a well paid job and we would have had to make him a ridiculous offer to get him to stay and we aren’t in a position to do that. There was a sense of inevitability about his departure and he goes with our best wishes.

“Tom Hannigan was in a very similar situation and is one that we would have loved to have kept but logistically it just wasn’t possible. We tried to sign Tom four years ago when we first came to the club, but chose to be loyal to his club at the time. Who knows, if we have got him sooner then we might have moved up through the leagues a little quicker because he has been fantastic.

“We didn’t want to get into a situation where some of the lads were part-time and some were full-time, everybody must be committed to this decision for it to work.

“Danny Lloyd was looking for a change because he wants to be playing more regularly. I can’t guarantee anyone a place in the team because we will have massive competition, particularly in attacking areas. He needed a fresh start and it was probably best for both parties.

“Brad Barnes probably falls in the middle a bit. He has a job and whilst he could have perhaps gone full-time, again I think both parties needed a change. We didn’t see the best of him last year and spent some time out injured, but he has done a good job for us over the years. His partner has just had a baby and priorities can change in that situation so he has chosen to go somewhere closer to where he lives.

“Every player that has left goes with our best wishes but it is time for us to look forward and continue to build a stronger team for next year.”