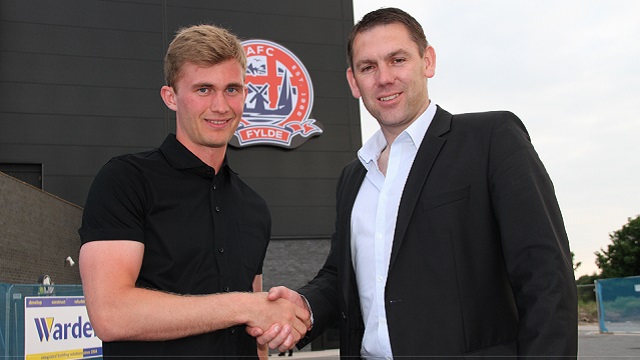 AFC Fylde are delighted to announce that defender Josh Langley has penned a new two-year deal with the club.

Langley’s fantastic form for the Coasters has attracted interest from elsewhere and manager Dave Challinor was keen to tie the former Wigan Athletic star down to a new contract.

The 23-year-old admits he was delighted to put pen to paper on a new deal and now hopes to right the wrongs of last year.

“I’m made up,” said Langley. “Coming off the disappointment of the play-off final last season, this was a major positive for me.

“That was a bad week and it hurt me a lot. Any defeat is difficult, whether it’s in the league or a cup, but losing in the final was devastating.

“However, after the dust settled, the manager rang me to offer me a new contract and I couldn’t sign it fast enough. Now I just can’t wait to get going next season.

“I had no doubt that this was where I wanted to be. We are a very ambitious club, with the full backing of the Chairman and the management. Everyone is working hard to keep the club moving forward and that’s important to me.

“I don’t want to be with a club that are happy with mid-table or just surviving in the league. I want to be part of a team that’s pushing at the right end of the table.”

Langley has enjoyed a fine partnership with departing centre-half Tom Hannigan over the last two years, but is relishing the chance to work with new man Steve Williams, who joined the club from Barrow.

“I was gutted when we lost Tom, but I don’t think it will affect my game. The new lad has come in now and I can’t wait to meet him and hopefully we can form a good partnership.

“It might take us a while to get to know each other, as it did with Tom, but if we can form anything like the same partnership then we will be okay.”

Langley highlighted the club’s decision to go full-time as a huge plus for him and he hopes that the team can take advantage and continue to improve.

“I was full-time when I was at Wigan Athletic so it won’t come as a big shock to me. My body is used to training every day.

“We know we have to work extra hard in pre-season as we have an advantage of being one of the few full-time clubs. We have to get ourselves as fit as we possibly can and make the most of this opportunity.

“It gives you a better chance to work on your weaknesses because we now have the time to do that.

“Everyone agrees that it will be a very difficult league next season, but if we can keep improving our squad from last year then we will be in a very good position. We have already brought in three very good players and there will be more to come I’m sure.”