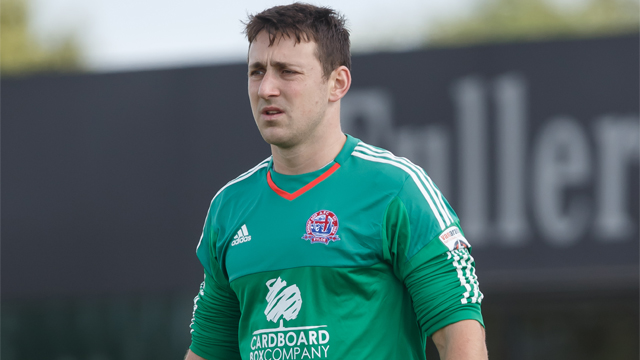 AFC Fylde face an arduous 12-hour round trip to Eastbourne Borough tomorrow in the FA Trophy, but one man on the team coach is no stranger to long journeys.

Goalkeeper Ben Hinchliffe doubles up as a long-distance lorry driver by day and has backed his teammates to come through a testing period of away games starting tomorrow.

As well as the trip to Eastbourne, Fylde must also travel to Lowestoft Town, in Suffolk, in the league as they continue their push to gain promotion from the Vanarama National League North.

Whilst Hinchliffe admitted the journeys are ‘not ideal’, he praised the club for approaching away games in the right manner.

“It’s not ideal spending hours on a coach but we’re fortunate that, at Fylde, we’re trying to do things right. We’re going to Eastbourne the day before the game and staying over.

“In terms of passing the time, everybody’s different to be fair. Some lads will put a DVD on, some lads play cards and some lads are quite quiet. We’ve got a few TVs on the bus too and things that help pass the time.”

As part of Hinchliffe’s job as a lorry driver, he says he’s used to spending days on end travelling away from home.

“I’m mainly North West based for my job. Sometimes we’ll go down as far as Warwickshire, near Leamington Spa and all around Wales. We’re sometimes travelling for three and a half hours on average.”

The Fylde shot stopper did however admit that he prefers played games at Kellamergh Park as opposed to the long away days. One factor, Hinchliffe stated, was the fans, who provided tremendous support for the Coasters week-on-week.

“The attendances at Kellamergh Park are getting better. The club are putting themselves about in the right way in the media. There are a lot more young people at the games than when I first joined four years ago and the fan base is slowly building.”

After Fylde booked their place in the Second Round of the FA Trophy on Tuesday with a 4-0 win over Skelmersdale United, Hinchcliffe said it was a relief to the entire squad that the game was finally played.

“It was a massive relief. If it was called off again, we’d be playing it on Saturday and, if we’d won it, we’d have gone to Eastbourne on the Tuesday night.

“When you’re at a part-time club, lads would have had to take days off work which hits people in different ways. To get the game on at a place like where we played last night was really great.

“The pitch suited us a lot more than it would have done at Skem.”