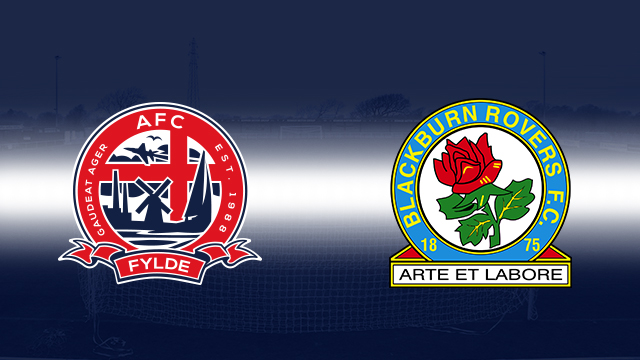 AFC Fylde finished off their pre-season campaign with a fantastic 5-1 home victory over a Blackburn Rovers XI at Kellamergh Park.

A first half equalizer from Josh Wilson cancelled out Anton Forrester’s opener before a terrific second half performance saw Fylde add four goals after the break to compile the misery on the Football League Championship side’s Development Squad.

Dion Charles has had a superb pre-season and he scored his fifth goal in eight games to give the Coasters the lead, before a Joe Whittington goal either side of a Danny Rowe brace saw Fylde run out convincing winners in a one sided affair.

Cory Bent had the opening chance of the game as he did well to connect with a ball across from Danny Lloyd and he hit a fierce left footed shot at goal from a tight angle but it flashed a fair distance wide of Blackburn’s Italian goalkeeper Simonsazzi’s left hand post.

It took sixteen minutes for either side to register another attempt at goal and this one, Blackburn’s first, was the opening goal. Jordan Preston advanced towards Urwin’s goal before the ball found its way to Anton Forrester via a deflection off Joe Gregory and Forrester made no mistake as he blasted the ball past the onrushing Urwin.

Shortly after, David Carson fired one well over the bar for the away side as they looked to add a second but his effort wasn’t troubling Urwin in the Coasters goal. Youngster Cory Bent looked lively for The Coasters and managed to get in between the Blackburn centre halves but his effort went wide.

The equalizer came on twenty-seven minutes through Josh Wilson and what a goal it was as he fired past the helpless Simonsazzi with a drilled effort from twenty yards out. That was Wilson’s first goal of pre-season and it brought The Coasters level, and on course for their fourth straight 1-1 draw.

Jordan Preston tried his luck straight from kick off for the away side as he was played through by Wharton but he scuffed his effort wide of Urwin’s goal. Straight up the other end, Danny Lloyd went even closer to scoring as his left footed effort went just wide of the near post after good work to set him up from Bent.

Minutes later, Cory Bent went very close to giving Fylde the lead as he was played in by Lloyd after good work by him down the left. Bent pulled the trigger and his powerful shot beat Simonsazzi but came back off the post and was cleared away to safety.

The Coasters then went close again twice through youngster Joey Mullen, who is looking to be a mainstay in the first team picture this season. First, he fired straight at the Blackburn goalkeeper after he broke into the box and had the whole of the goal to aim for, and then he raced clear of the away defence and put the ball past the onrushing Simonsazzi – but the ball went agonizingly past the post too.

Boss Dave Challinor made wholesale changes at the half-time break, brining on Jake Gregory, Carnan Dawson, Josh Langley, Dom Collins, Dion Charles, Danny Rowe, Richie Allen and a Trialist. Josh Wilson moved back into midfield, the Trialist who started the first half and Matt Urwin also came back out for the second half.

Anton Forrester tried to get things going early in the second half for Blackburn as he twisted and turned outside the Fylde box but his shot was deflected wide for a corner which was easily dealt with by a new look Coasters defence.

Fylde brought on youngster Carnan Dawson for the second half and he was played in down the left by Rowe before firing at goal but Simonsazzi was equal to it as he forced it round the post for a corner. Forrester than tried to give the away side the lead again but his efforts were thwarted.

Dion Charles has been the star of pre-season for The Coasters and he scored his fifth goal of pre-season to give Fylde a 2-1 lead on sixty-five minutes and his goal was on a par with Wilson’s earlier on. Charles picked up the ball down the right before proceeding to beat four Blackburn defenders and then he fired past Simonsazzi low into the corner to give Fylde the lead for the first time in the game.

The Coasters added a third on seventy-six minutes through Danny Rowe as he poked the ball home from an acute angle to give Fylde a two goal advantage. Substitute Joe Whittington played a major part in the game after coming on for the final twenty minutes and he fed Rowe who made it 3-1 to The Coasters.

Just two minutes later it was 4-1 as that man Whittington hit a twenty yard piledriver past Simonsazzi and into the back of the net for his first goal for The Coasters. It was a superb effort from the youngster who will be looking to break into the first team picture this season.

The extra gloss was put on the score with almost the last kick of the game as Danny Rowe grabbed his second goal of the game as he tapped the ball home from a yard out after a defensive mix up at the back from Blackburn allowed Rowe in. Rowe was Fylde’s top scorer with 31 goals last season and he’s made good progress in Fylde’s pre-season campaign, adding another two to his collection in this game.

It was a superb all round performance from The Coasters who go into the start of the National North season with a 5-1 victory. The Coasters travel to Solihull Moors on the opening day of the season this coming Saturday.

Man of the Match: Josh Wilson